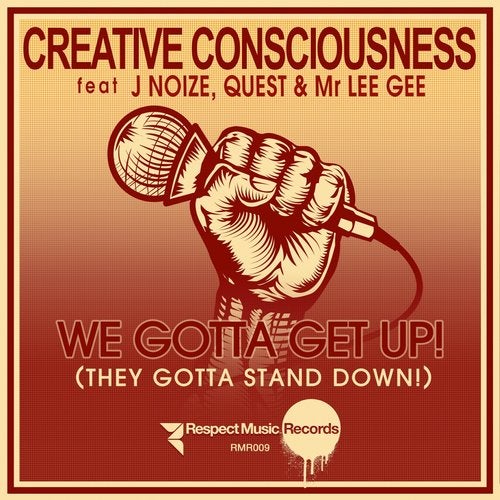 Creative Consciousness is one of the many aliases of Respect Music Records owner James Canning. This particular alias was created as a means of aligning with like minded artists from all over the world to share their views on the struggle of the average human, battling against the western corporate monopoly and how opportunities of freedom and sustainability could be just around the corner, should people choose to stand up for the rights of themselves and others. Each collaboration is produced and co written by "Creative Consciousness" whom takes on the musical influences of the culture and country which he is collaborating with, whilst allowing the indigenous artists of this region to share their views on such topics in their own native tongue. To make things even sweeter and to put their money where their mouth is, it was only right that Respect Music Records donate all profits from this project to an educational non for profit organisation as a means of aiding the world from the grips of consumerism and greed and back to the nurturing arms of life and productivity.

"We Gotta Get Up! (They Gotta Stand Down!) is the debut release for Creative Consciousness and he thought it only right to start the collaborative journey at the epicentre of corporate greed and western infrastructure, the USA. To add to this symbolic release even furthermore the track will hit Spotify on February 20th which is actually International Social Justice Day.

The track was composed by Creative Consciousness and had some amazing session work laid down by Guitarist Brad Weynton, whilst on keys tying it all together and offering that finishing sparkle, renowned international Keyboardist/Producer Simon Grey. The composition is undoubtably inspired by the Funk, Soul and Rhythm & Blues influences of the USA, resonating similar sounds to that of Raphael Saadiq, giving the track a very palatable and accessible vibe for the mainstream but at the same time delivering a message of great importance, which is sometimes missed in this popular arena.

As a part of this collaboration Creative Consciousness sourced a diversity of artists that had similar views on sharing the truth with the masses. First up to bat is Chicago raised MC J.Noize, who introduces the track and the other collaborating artists, whilst giving the listener a detailed insight into corporate greed and its effects, whilst also offering a call to the people to be strong, unite and live by example for the children of tomorrow. The second collaborator is the accomplished and forever giving Brooklyn based Reggae Vocalist and MC, Mr Lee Gee known for his work with Masta Ace and many others over the years. Mr Lee Gee provides the chorus chant, or call to action if you will, for this revolutionary track, as well as some very smooth backing vocals, again drilling home that freedom is far more rewarding then money. Last but not least, yet another Chicago based artist by the name of Quest, with her soulful vocals offering colour and harmonies to the backing vocals of the chorus line and then to climax the track she shares one of her greatest gifts, some spoken word poetry which sums up the track in its entirety. To quote Creative Consciousness "When I heard this, it gave me goosebumps, her words are so emotional and true". As a result Respect Music Records have left it here below for all the readers to really grasp the whole idea of this collaborative project which is "Creative Consciousness"

"Where I live kids die everyday
I keep hearing babies names on the news and it screws with my head
I've heard its said that it takes a village to raise a child
but when the village has been pillaged it's time to stop this madness now and build
build a brighter horizon, all the mistakes we made and let them guide our future
and ain't working doin' what we use to
We can't afford to make excuses
Look into the faces of these babies, you can't tell me it's not time
Time to get movin',
Time to remember the goals we need to reach and the dreams that need pursuing
All is not lost
This fight must be won at any cost because it is worth it
and because it is necessary, because we deserve it
And when the laughter of our children reaches higher then the crying and gun fire
You'll still be proud of what we've done and will do
But right now, you need to Get Up!"

A statement and call to all who wish for a better tomorrow! Much respect to all whom have been involved in nurturing this ethical masterpiece.

Stickybuds: "Good song guys, digging the positive conscious vibes. Thanks for the stems as well. Biggups and much respect!"

Anthonne Boogie Sheperd: "Damn, this is super funky. That bassline is irresistible."

We Gotta Get Up! (They Gotta Stand Down!)