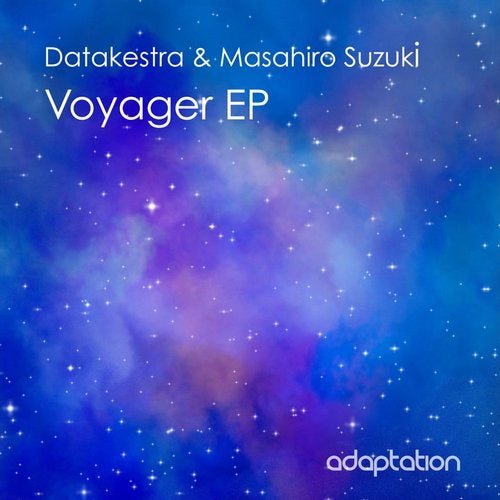 Adaptation Music's Japanese connection continues with Datakestra & Masahiro Suzuki's new project 'Voyager EP', supported by Groove Assassin, Lars Behrenroth, Vinny Da Vinci, Nick Holder, DJ Rasoul, Souldynamic and many more influential DJs.
The first of two outstanding tracks is 'Maiden Voyage', which is an epic and uplifting atmospheric journey that just builds and builds, making it an ideal closing track for many a DJ set. The second track 'Rhodes To The Moon' is another journey laden with a funky bass line and captures the rhodes hooks that will be familiar with fans of the early Soulfuric releases, before breaking into a great solo during the break.

Both Datakestra and Masahiro Suzuki are successful producers in their own right. Datakestra has a long term affiliation with the Unknown Season label and achieved a #1 spot on What People Play with his track 'Distance' last year, whilst Masahiro has had a number of releases on Nite Grooves, Apt. International and Black Vinyl. Their excellent production pedigree and array of different musical influences are apparent on 'Voyager EP' which is sure to lead to future success for the Tokyo based duo.