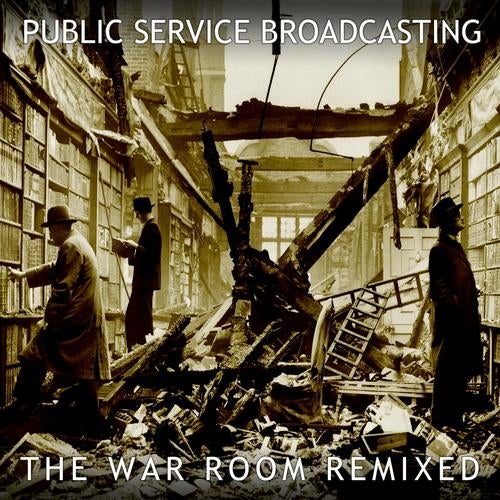 *XFM John Kennedy session to be arranged for October

"It's an industrious, diligent sound, and, in the flesh, surprisingly danceable: slamming chemical beats accompanied by old cine footage, providing a peculiar opportunity to party to Pathe news"

*Spindle EP review: 'Embracing the sampling skills of Grand Master Flash and psychedelia of The Avalanches and David Holmes'

*UK tour dates through to October

*Rough Trade in-store to be arranged.

* 'London Can Take it' is the 2nd track to be taken to radio, tied in with Olympics (impact date of August 13th)

THE WAR ROOM EP promotion since release date 28 May 2012


Granted unique access to propaganda films from WWII-era Britain by the BFI and setting them to new music, Public Service Broadcasting unveil 'The War Room EP'. Expect breathtaking visuals, atmospheric synths, pounding drums, Krautrock guitars and poignant piano as J. Willgoose, Esq and his drumming companion Wrigglesworth teach the lessons of the past through the music of the future...

The 5-track EP takes a look at the war from a British perspective - taking in the preparations for war in the foreboding 'If War Should Come', proudly boasting during the Blitz that 'London Can Take It', and emphasising the importance of the home front in 'Dig For Victory'.

Lead track 'Spitfire' - a driving, motorik Krautrock influenced tune - is an adaptation of the 1942 Leslie Howard film 'The First of the Few', telling the story of the origins of the talismanic fighter. Howard was viewed by Josef Goebbels as the most dangerous British propagandist of the era and his own life was to end in tragedy when the passenger plane he was travelling on in 1943 was shot down by the Luftwaffe over the Bay of Biscay.

The War Room is dedicated to J. Willgoose, Esq.'s great-uncle, George Willgoose, who died at the Battle of Dunkirk in 1940 aged 26. The final track of the EP, 'Waltz for George', is a sombre close to affairs, featuring the banjolele owned and played by George Willgoose which has remained in the family.
This EP is a follow-up to the band's first single, ROYGBIV, released in March 2012, which was playlisted on 6Music and picked up positive press.

Music Week: "This duo are bringing the past up to date whilst sounding like they belong in 2012."

More Than The Music gig listings

Saturday 9th June - How The Light Gets In Festival, Hay-On-Wye