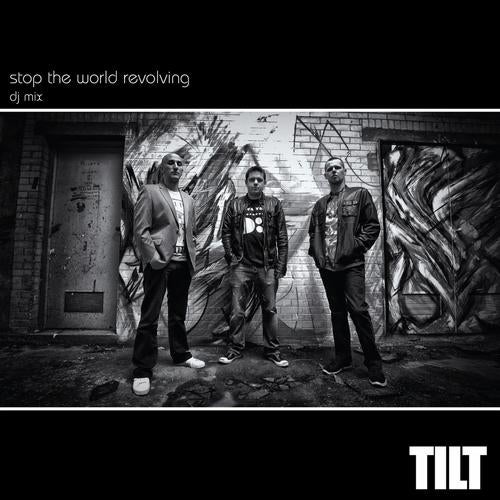 Tilt, creators of trance classics such as the Bjork-sampling 'I Dream' and 'The World Doesn't Know' arrive into the year 2013 with a long awaited comprehensive 'Best Of' compilation, titled 'Stop The World Revolving - The Best Of Tilt'. It comprises of an exclusive un-mixed 14 track selection of Tilt over the years, plus a 9 track mix CD full of the duo's club favourites andremixes.

Often called 'Mighty' or 'Legendary' TILT have been a huge part of Clubland for 20 years now. They have gone on to DJ and perform in all of the Worlds top clubs and venues, from Ibiza to South America, North America to Australia. The guys have DJ and performed on huge tours supporting Paul Oakenfold, Simply Red and MTV. DJing in super clubs such as Twilo (NYC), Pacha (Ibiza/South America), Space (Ibiza), Amnesia (Ibiza), Womb (Japan), Crobar (Miami), Vinyl (Danny Tenaglia, NYC), Ministry of Sound World tours and all the major Festivals. Mick Park's DJ partnership 'Parks and Wilson' also produced two widely successful Essential Mixes for the Pete Tong show on Radio One (one of which was voted second best of all time behind Sasha & Digweed).

TILT were signed by Paul Oakenfold to Perfecto/Warner Music, and in 1996 they had their first UK top 40 hit with 'I Dream'. More big tracks followed including 'My Spirit' and 'Places'. In 1998 they moved record label to Red Jerry's brilliant Hooj Choons and more hit singles followed. 'Invisible' (featuring the vocal talents of Dom Atkins AKA Grace) was a top twenty hit, and 'Rendezvous' and 'The Seduction Of Orpheus' (a favorite of Danny Tenaglia) were massively influential tracks which moved the progressive/trance-dominated house scene into previously uncharted, darker territory. TILT had become a major force in the international dance music revolution - with their tribal drums, booming bass-lines and unforgettable melodies, they blurred the boundaries between house and trance and supplied millions of dance music lovers worldwide with the soundtrack to their weekend.

To date TILT has had seven UK hit singles, and are now registered to the official Chart Encyclopedia in the UK. Combined together, TILT's production & remix portfolio is second to non - U2, Dido, Kasabian, Arctic Monkeys, Paul Van Dyk, Tiesto, DJ Pierre, Laurent Garnier, Inner City, Kevin Saunderson, 'Mad' Mike Banks, Boy George, Paul Oakenfold, Jeff Waynes 'War Of the Worlds', Way Out West, Bedrock, Quivver, Apollo 440, Cosmos. They also collaborated with the late great Malcolm McClaren, Manager of 'The Sex Pistols' on "Lacme - The Bell Song". In 2005 TILT released their debut album 'Explorer' which featured the massive clubland hits 'The World Doesn't Know' and 'Twelve'. Another side project was the New York underground anthem 'West On 27th' by Killahurtz, released on Hooj Choons, it has just been remixed by TILT.

In 2011/12 they produced "No Other Day" which featured Maria Nayler, and re-released the classic "The World Doesn't Know" for Lost Language's 100th release. finally, the group plan to release new TILT material throughout 2013/14 on Mick Park's Pro B Tech Label.
--

To kick off the album we have 'Places (7" Mix)', a landmark track that was released back in 1997 on Perfecto to critical acclaim. It's an epic, melody driven trance record with John Graham's powerhouse vocals at the helm. Next, we have the Radio Edit of 'Spirit', also on Perfecto, a typically momentous vocal track from the group back in 1996, wrapped up in a silky 3min 30sec pop format. 1998's 'Butterfly (Radio Edit)' is up next. Another Perfecto gem, 'Butterfly' is 90's euphoric trance at it's best with building arpeggios and a bounding bass line. 1999's 'I Dream (Tilt's Resurrection Mix)' sees the group arrive on Hooj Tunes. Initiated with harder bongo-led polyrhythms and darker melodies and bass, this was a DJ staple right through to the early 00's.

Next up we have 'Invisible (Original Vocal Edit)', also on Hooj in the same year. It's part of quite possibly one of the rarest progressive trance records in existence. It's an opulent, crystalline track with a great hook and vocal line. To follow, we have 'Seduction Of Orpheus (Tilt Mythology Mix)'. Part of the 'Dark Science EP' released on Hooj in 1999, this version is part Sci-fi epic, part melencholic prog with the use of tribal drum-march samples, dissonant synths and spoken dialogue in the intro.

2007's 'Angry Skies (Tilts Reactivation Mix)' is part of Tilt's early releases on Lost Language. By this time, production techniques had progressed greatly and this was reflected in this delirious trance stomper. 'The World Doesn't Know (Original)' backtracks to 2004 on Lost Language. Tilt showcase their trademark use of melodies and epic euphoria on this absolute Trance classic. Next we have Tilts Duodecim Edit of 'Twelve', also on Lost Language in 2004. Considered by many as a timeless classic, 'Twelve' is a perfectly executed, perfectly formed progressive masterpiece.

'New Day', released back in 2005 as the penultimate track to their album 'Explorer', utilises a more singer-songwriter approach to the Tilt sound with the use of guitars and subtle strings under a mellifluous female vocal. 2012's 'Your Love (Tilt Sacred Heart Mix)' see's collaborator Danny Stubbs step up to production duties with Sam Mollison on vocals, creating a bold prog track that reinstated Tilt as major players in the Trance world. to finish the CD, we have the original version of 'Can You Feel It,' a massive arp-driven vocal track that's often overlooked.

For digital buyers only, we have a few more exclusive tricks up our sleeve. Released in 2011 as part of 'The Century EP', 'No Other Day (Sergey Tkachev Remix)' is a propulsive, even slightly melancholic prog groover on Lost Language. As a special extra, Tilt have put together a 20th year anniversary DJ mix for your listening pleasure. Plug in, turn it up, and journey off into progressive heaven.

CD 2 - Mixed by Tilt. Here's what Mick Park had to say about its creation:

"We've always been fans off dramatic intro's as it sets the mood for the whole CD. We found the 'Icarus' soundtrack amongst the music we had for the mix and worked perfectly. Gabriel I & Quinn Jerome have been producing some cool music which had featured on our radio show so it was great getting hold of 'Muted Gold'. We wanted to do a couple of exclusive things for the mix so we decided to remix Nang Records' 'Call' by Lasertom for the beginning of the set.

People always expect the big anthems from TILT so it was a cool departure from that style of production on this occasion. I'm head of A&R at Pro B Tech Records and 'The Underground Allstars' is a fund raising project I started last year with Brent Lawson. Brent own's the label where we make a track and get various producers to donate a mix/remix and all profits go to a sick local child. To date we've raised just under ?4000 and 'She Rises In The East' was the first UA release on the label. We've known Paul Nolan for some years now and been fan's of his work. I asked an old friend Fulvio Perniola (Fathers Of Sound) to remix it for the label and we loved the final result so it was only natural to get it on the CD.

Off the back of that, we find another Gabriel I & Quinn Jerome release called 'Returning' which worked nicely alongside something we had done with Sam Mollison and Kastis and Arnas D 'Here Is Not Now' - we've had some fantastic feedback on that particular track and its something we're really happy with sonically. Fulvio Perniola provided another superb track entitled 'SuBBuM' from an EP which is now released on Pro B Tech Records. He's so consistent and such a great guy to work with! Finally the last track on the CD is an old rework of a classic from by gone days called 'West On 27th'. I played it at Cream last year and it went down a storm so Alex and I kept it in the mix and now it's finally seen the light of day as part of this CD."