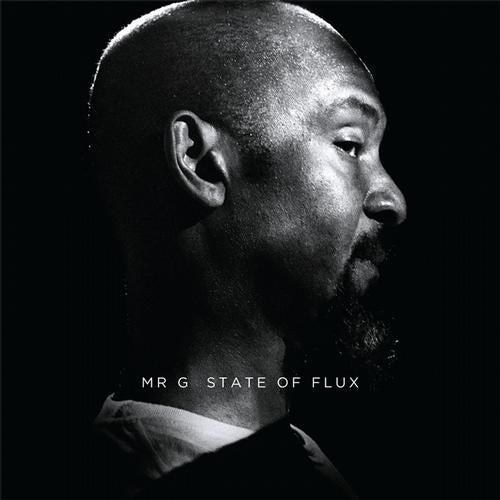 Back and cooking up more funk and flavor with his second album for Rekids, Mr G proves hes still the king of rhythm with State Of Flux. Packing more history than most of the top current producers put together, Mr G has been fine-tuning his breed of music for two decades. Described by the man himself as its all about a bassline, his music takes the formula of a ballad and the movement of reggae. Read Resident Advisor feature here: http://www.residentadvisor.net/feature.aspx?1224 As with his debut State Of Flux packs a punch in its eleven-track journey that takes in an unexpected array of styles, reinventing itself for the final climax. Mr G says of it, This album means a lot to me as it came from the pain of losing my spar Lev Van Delden jnr. Its me looking at every thing through different grown up eyes and really going deep into the groove! I think this is a really great body of work and unveils new shades of the G sound. I am finally understanding it! Taking techno to new levels of power Gs Riddem opens the battlefield for an epic onslaught. Mr Gs colourful past working together with the greats such as Jeff Mills can be heard in the echoing high hats of One Year Later and Remember This! whose vocal is reminiscent of classic Mr Fingers or Frankie Knuckles material. His busy mind reflective in the music, always in full throttle making subtle gear changes to hypnotise. This is mind control in full effect. Synths and sequences begin to become more haunting and alive as the album reaches its centre. Dark Thoughts? (The Afterworld) strange and captivating energies and Absurd Beatz No 4 dextrously cut beats demonstrate how a master moves. But then Mr G takes a breathe for Pause For Thought With You featuring Garfield King talking of our time and age of consciousness and the dubby textures of Bills January Blues and psychedelic New Life lead us to the close of this inspiring body of work. A legend that continues to re-emerge, Mr Gs early experiences being part of KCC and the infamous Confusion/Melange parties in London where the likes of Richie Hawtin, Kevin Saunderson and Derrick May they would play on a reggae soundsystem for 80 quid every Sunday night shaped the landscape of music as we know it. You can't really imagine that early techno stuff played on a system like that. I remember one party where we nearly took out the power of an entire city block! His fusion together with Cisco Ferreira as the ground-breaking techno outfit Advent led him to evolve from being solely a DJ to a top producer, although he did still breakdance on the stage for the performances. Nowadays he doesnt DJ but prefers to throw in down live and only produce, but takes inspiration from the old as much as the new with Motor City Drum Ensemble, Kyle Hall, 6th Borough Project and Rekids own Radio Slave being current muses. This led Rekids to be the home for his last two albums, his greatest works to date and long awaited introduction to the album market after numerous releases with the likes of Skint / Loaded, Defected, Duty Free, Moods and Grooves USA and his own Phoenix G. Whatever he dreams up next, one thing is for sure, Mr G is a permanent fixture in the music horizon, his output still making an impact twenty years on.