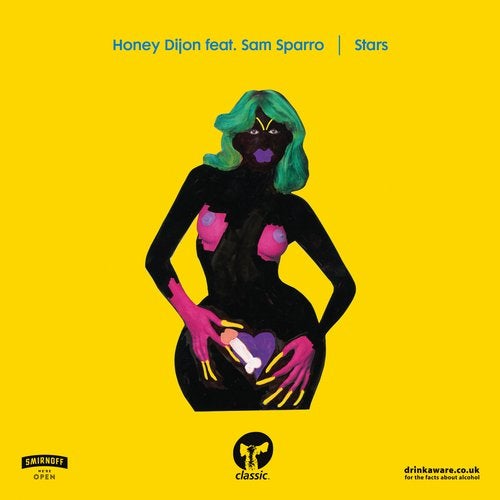 In October 2017 Honey Dijon was commissioned to take part in the Smirnoff 'We're Open' campaign, aiming to promote inclusive night time culture and celebrate nightlife's ability to transcend gender boundaries and prejudice. As well as appearing in the 'We're Open' TV commercial, Honey was asked to record her take on the initiative's ethos for creating positive change, making dance music culture a more open-minded and socially inclusive space. What resulted was a rework of 'Queen of Disco' Sylvester's 'Stars' featuring vocals by singer-songwriter Sam Sparro, who she collaborated with previously on her album 'The Best of Both Worlds'. Now being released via Classic Music Company with breathtaking artwork from assume vivid astro focus who also supplied cover artwork for the album, the entire proceeds from the release will be donated to LGBT Foundation.

Created with parts recorded especially for the We're Open advert, 'Stars' (Disco Version), produced with the help of Classic head Luke Solomon and studio partner Lance Desardi, pops Sylvester's spangled party-starter directly into 2018. Previously made available as a free download to coincide with the launch of the campaign, the Cosmic Energy Dub, underlining Honey's acidic but sweet production, is preceded by a mix by one of her favourite producers of the moment and fellow Chicagoan, Cratebug, his Nova ReMix referencing the classic disco elements of the original with hints of acidity. Paying lip service to the legacy of a truly gender-redefining figure whose music is nothing but inclusive and empowering, Honey Dijon and Classic prove the power of music to inspire positive change in the dance music communities with this 'Stars' release.