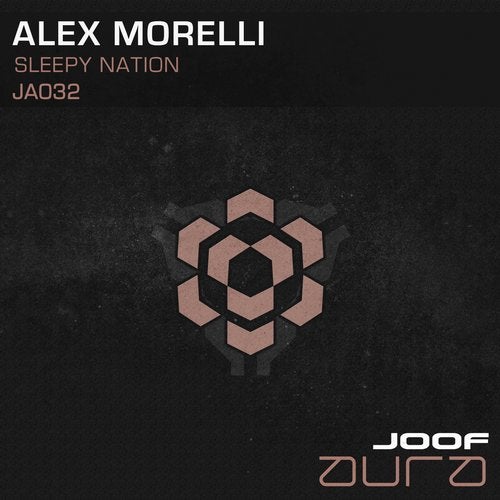 Rosario, Argentina based producer Alex Morelli marks his JOOF Aura debut with the tantalising progressive grooves of this two tracker entitled Sleepy Nation/Covenant, which comes backed up with three solid remixes offering something for all kinds of sets. In the last few years Alex has enjoyed a plethora of releases across several quality labels. His sound has been picked up by many jocks with a growing support base coming with every release. We're delighted to have him on board here at JOOF Aura and we know you're going to enjoy this solid pack.

The Original Mix of Sleepy Nation gets us moving with a distinct atmospheric progressive vibe. Tight beats and lush basses drive the groove beautifully while cosmic synths deliver subtle melodic sequences. An array of quality FX beef up the sound providing the perfect fodder for a late night foray into the progressive underworld.

Covenant intros with a superb, almost haunting sequence made up of awesome FX and a pounding kick drum. The track gains its identity early on as we settle in for a raucous trip into the progressive tech world. Beautifully arranged drums dish out a steady flowing rhythm as dark, droning basses lurk on the low end. Wonderful tribal elements are matched against a cinematic background filled with intensity that will definitely do some damage on the floors.

Russian DJ and producer Kirill Smirnov aka Enlusion joins the JOOF Aura remix roster with a superb effort on Sleepy Nation. This young artist is making his mark on the progressive scene with some gusto, in just a very short space in time he has notched up quite an impressive back catalogue with releases on labels such as Green Martian, Bonzai Progressive, Unique Sound, Abstract Space, OLD SQL Recordings and Mystic Carousel. In January 2016 he announced a new record label called Forescape Digital which intends to focus on the progressive, trance and techno genres. On the remix here we're treated to a breathtaking journey deep into the progressive abyss as chunky beats line up alongside a beautifully lush, moving bassline. A rich, cascading arpeggio draws us in while expertly crafted pads and FX build the atmosphere. Expect to be blown away with this one, top notch.

Monojoke returns to JA with this fantastic remix of Sleepy Nation which comes after we last saw him here with Hollow Child back in October 2016. Prior to this he showed up on our flagship label JOOF Recordings back in 2015 with Fallen Culture alongside studio partner Tuxedo. A major force on the scene, he's been churning out quality vibes since 2007 and he won't be letting up anytime soon. Here the remix from Monojoke takes on a hybrid techno progressive flavour thanks to a dizzying display of drum arrangement. We're drawn to the intricate patterns of the kicks and shuffling array of hi hats that make up a tight rhythmic flow. Deep basses fade in and mesmerise the senses as the drums intensify alongside melancholic synths and that teasing techno trait. A must have for any set that will not disappoint.

Ivan Shpakovskiy aka Ivanshee is back at JOOF Aura with a sublime remix of Sleepy Nation which we've no doubt will rock the floors. His last outing here - Orbital Throb - gained great support acros