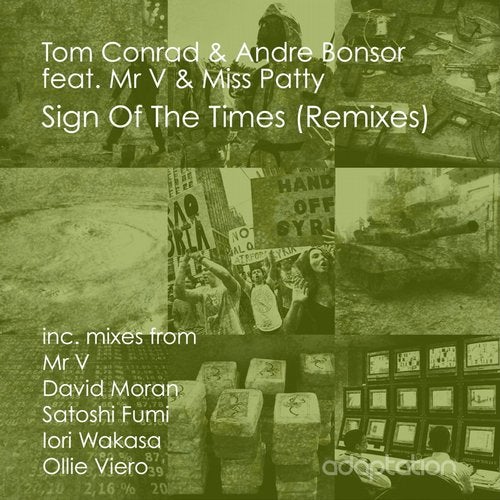 Adaptation Music's 43rd release returns to the succesful release from Tom Conrad , Andre Bonsor, Mr V and Miss Patty for some fantastic deep house remixes from the USA, UK, Japan & France. DJ and radio support from the likes of Dan Curtin, Robert Owens, Groove Assassin, Chris Fortier, Black Sonix, Jask, Louis Benedetti and many more.
U.S house music legend Mr V delivers both a dub and dubstramental which are simple and effective classic cuts of deep dubby house which has seen him grace the likes of Strictly Rhythm, NRK, Soul Heaven, OM Records and many more. His vocal sidekick, Miss Patty has shared in some of Mr V's biggest releases to date such as 'Da Bump' and 'In Da Club', both of which were licensed to Defected Records, as well as releasing her own singles on Mr V's label.
New to Adaptation but already making waves in the deep house scene is UK producer David Moran. David delivers a brilliant slice of upfront deep house which will most certainly add to his ever growing reputation.
Adaptation Music stalwart Satoshi Fumi of Get Physical, Yoshitoshi & Bedrock fame delivers two cuts of quality acid infused deep tech house which once again showcase his consistency and just why he is in such demand as both a producer and remixer.
The Japanese connection continues with the introduction of Tokyo's Iori Wakasa, who delivers a deep dubby and hypnotic techno edged remix. Iori's productions have been remixed by the likes of Pezzner and OFF Recording's Andre Crom amongst others and continue to receive international DJ and radio support.

Last but by no means least is the talented French producer Ollie Viero whose background as a drummer has seen him embark onto new pastures within the house music scene, with releases on Bonzai Music and further work with Adaptation Music on the horizon.