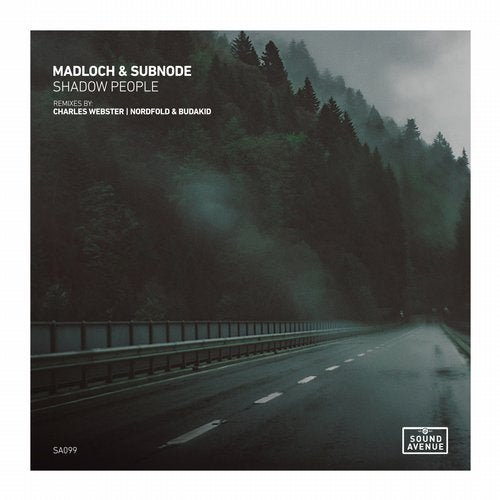 Sound Avenue's second offering of 2019 finds the label showcasing new interpretations of 'Shadow People' by Madloch and Subnode. Originally released in October of last year as part of the duo's 'Second Sight' EP, it marked the beginning of a creative partnership between the Belgian artists. Sound Avenue now calls upon Charles Webster and Nordfold and Budakid to reinterpret the track for the new year.

Charles Webster has been a fixture of the electronic underground for well over three decades. The UK artist has been responsible for some of house music's most memorable creations, while appearing on storied imprints such as Defected, Freerange, Innervisions, NRK and  Rebirth. More recently Charles has lent his remixing prowess to Connaisseur Recordings, Lost and Found and Selador. Now presenting his first production of 2019, Charles makes a welcome and much anticipated debut on Sound Avenue with a stunning rendition of 'Shadow People'. Beginning with punchy, organic beats it's the warmth and fluidity of the groove which becomes instantly compelling. Perfectly contoured and full of great character, it anchors what is a pulsating, percussive and highly evocative slice of deep techno. In deconstructing the main elements Charles has expertly added mysterious field recordings and esoteric vocal edits, for what results in a dynamic, vibrant and timeless piece of music which is under constant evolution.

The second and final interpretation of 'Shadow People' is provided by Nordfold and Budakid who also make their label debut. Hailing from the Netherlands (although Budakid now resides in Berlin) the Dutch duo have been occasional studio partners since making their collaborative debut in June of 2017. Both owning impressive solo discography's, collectively the pair have showcased their music on All Day I Dream, Atlant, Last Night On Earth, Lost Diaries and Lost and Found, with joint releases coming on the equally impressive Einmusika, Stil Vor Talent and Sudbeat Music. Now presenting their first collaborative effort of 2019, Nordfold and Budakid round the release out with a fresh take on 'Shadow People'. On a backbone of buoyant beats and neatly tailored percussion comes retro grooves and solemn atmospheres. Fluid, bouncy and tastefully nostalgic, it's a piece that moves through a variety of reflective motifs. Initiating the main break are wispy overlays, descending over the framework as a hazy harmonic resonance saturates your senses, before the groove resets for a celestial finale. A stunning interpretation from Nordfold and Budakid who's studio synergy seems to grow with each successive outing. It caps off a well rounded remix edition for 'Shadow People' which is sure to find its way into a broad range of DJ sets over the coming months.