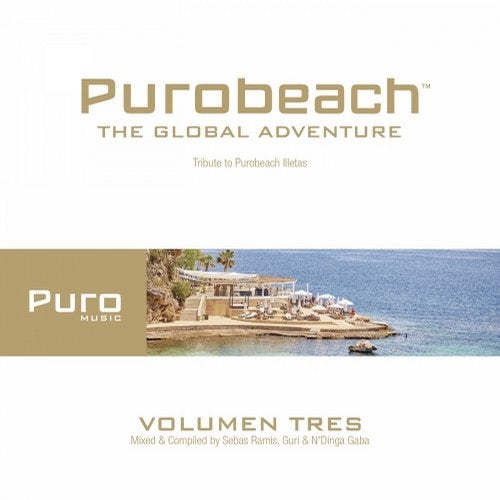 2017 is a special year for Puro Group, with the inauguration of a new paradise in Palma de Mallorca, situated in the fantastic cove of Illetas. It is an oasis full of Mediterranean energy and creativity, which in turn has inspired the latest volume of our already legendary compilation series, Purobeach TGA 3.

Purobeach The Global Adventure Vol 3, is made up of 3 mixes of the freshest, up-to-date music.
The first CD is 'Purobeach Essence' selected and mixed by Sebas Ramis. The elegance and sensuality that characterizes the brand iruns through this mix. Next up is the 'Pool Side' mix, from Mallorcan DJ and producer Guri. In addition, there is a Bonus track, with special guest DJ, the spectacular South African DJ N'Dinga Gaba, based in Baltimore, U.S.A, and recently nominated number 5 in the Afro House world by the electronic music store Traxsource.

Sebas Ramis maintains the Purobeach essence with a soulful house selection strongly influenced by the afro sensual sound that already set the mood of the previous volume. Tone, colour and tempo define an elegant and cosy mix. A perfect musical voyage for your stay at the Puro Group beach clubs.

Guri delivers a very Balearic set, full of Purobeach flavour, with a balance between soulful, groovy house songs and his personal, rhythmic and avant-garde style. Guri conveys to perfection his residency of the last 4 years at Purobeach Palma

'Purobeach The Global Adventure', always hides a top-quality surprise in each of its volumes. This time, African American producer N'Dinga Gaba has recorded 6 exclusive tracks from his "Global Diplomacy" label, as his calling card for the followers of Puro Music.
Elegant, sensual and beautiful Afro beat make up the sounds of the Bonus track sounds, Enjoy