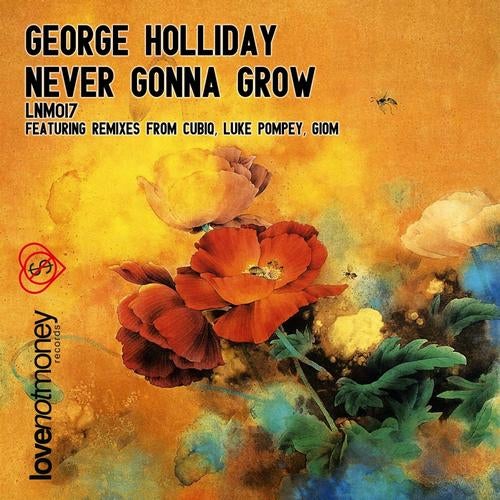 As the Love Not Money imprint reaches release #17, it's still tough to pin point the labels signature sound. A melting pot of imagination and tastes focusing more on making sure each release purveys quality music from across the board.

Next up is something a little different from the multi-talented George Holliday. With the original here being somewhat of a down tempo 'James Blake-esque' experimental track, not something we would usually sign, but when LNM artists and good friend's of George, Cubiq gave us the heads-up and supplied us with a storming remix that completely went against everything the original stands for it was obvious how well these parts could be utilised, so we made a few call's and followed suit with remixes from well known artist Giom and label boss Luke Pompey.

Now George Holliday is better known as a jazz pianist with an ambition to compose stylish pop. Alongside his chosen career path writing film scores, his music has brought him opportunities to work with many artists, thus bringing him arena gigs and even the chance to support the likes of Jessie J and Rizzle Kicks. The future for George is looking bright as he pursues many different angles of music from the George Holliday Trio through to his upcoming funk album due late 2012. 'Never Gonna Grow' is from his 2011 Winter EP and is a fine example of George's song-writing ability.

On remixes duties we have drafted in the world renounced talent of Giom. In a very short space of time Giom has become one of the most highly sought after producers, remixers and DJs in the deep house scene and has gone on to work with labels including Om Records, Ornate, Lo:Rise, Defected and LCG Music, providing both original music and remixes for artists including Fred Everything, Jay-J and LawnChair Generals. Not forgetting his long-term partnership with one of the biggest labels in the House scene right now... 'Lost My Dog'. His remix is a somewhat hypnotising and constantly evolving piece with lush pad's and dreamy synth lines, making great use of the vocal and proving graciously why the man is so in demand.

Finishing of the release nicely is a long-overdue remix from label boss Luke Pompey. With the label on course to hit 22 releases between the course of 2012 it's understandable the Luke has hardly had any time at all to get in to the studio but when he does the outcome is always something special. The result is a sun-drenched Nu-Disco affair driven by a pumping bassline, warm pads and a funk-laden groove that does not quit. Out of the three, this remix doesn't stray too far away from the original with amazing use of the part's, utilising the Rhode's to every inch of it's existence.

As the UK summer finally makes an appearance this EP is a fine accompaniment to any out door party, festival or nightclub and another stellar release from the LNM stable.