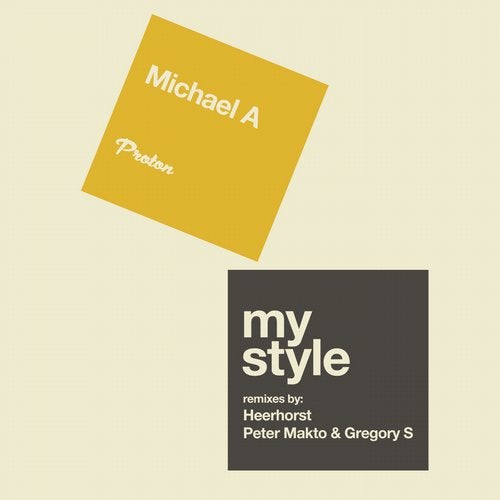 With his third original EP on Proton Music, Michael A created a three-track offering in September 2017 that epitomised "My Style". As we now return to the EP, two of the tracks receive a reworking from German and Hungarian debutants.

From the northern port city of Hamburg, Bastian Heerhorst has carved out a growing reputation through his techno productions. Defining his unique music as "a blend of styles and influences which span many genres", Heerhorst has created "cohesion and eclecticism" within his work. Thus, a plethora of production credits have found themselves featuring on a range of high-profile labels that include Frequenza, Stil Vor Talent and D-Formation's T U S H Music. Indeed, August 2017's "Iceland" EP was a classic example of a music triptych that encapsulated the Heerhorst sound with a strong techno underpinning.

Making his debut on Proton Music, the Heerhorst remix of "Depth" takes Michael A's original and intelligently transforms it into a driving techno monster that hits hard with heavy beat before a delicate stepped arpeggio plays out in angular fashion, hinting at the melodic themes of the Belarusian's original. A running bass pattern provides urgency and drama within the rhythmic framework, once again finding its mark from Michael A's original, while offbeat hi-hats create additional energy in a remix that is rare in its drama and dynamism.

Lifelong friends, Peter Szigeti and Gergely Sardi, have become a force to be reckoned with under their Peter Makto and Gregory S production personas. Both accomplished DJs in their own rights, Makto has been named "Hungarian DJ of the Year" on four separate occasions between 2006 and 2013, while both he and Gregory S are both part of the Hungary's famous TrueSounds DJ roster that has seen them play across the clubs of their home country and abroad in London, Berlin and Kazan. Plying alongside such leading lights as Henry Saiz, Dave Seaman and Guy J, the pair have become an established part of the DJ elite. A similarly impressive production career has seen the duo work with some of the finest underground dance labels after a debut remixing Eelke Kleijn for Manual Music, going on to feature on such impressive imprints as Highway Records, King Street Sounds and Nick Warren's Hope.

Making their Proton Music debut, the Peter Makto and Gregory S remix of "My Style" is an innovative working that takes a robust beat and head-shaking percussive groove as strong foundation before evolving impressively with melodic elements that echo the themes resonant in Michael A's original. Hypnotic in its inception, the vocal element that is so key to "My Style" finds itself front and centre throughout, its pitched down character providing genuine depth and intrigue, creating subtle variation over a hypnotic groove.

Remixes from Heerhorst and Peter Makto and Gregory S find Michael A's "My Style" very much still in vogue.