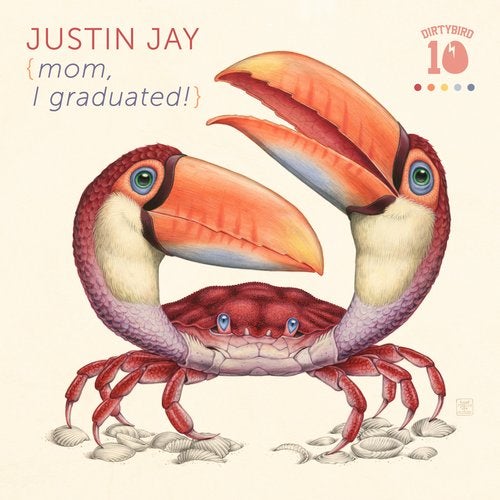 From the heat of the BBQ to the smoking hot talent of Justin Jay, as he returns to the feathery fold with his latest release. The youngest of VonStroke's proteges, the 22 year old producer continues to build on the promise shown on a string of heavy hitting Dirtybird releases (Femme Fatale, Static, Instincts, Le Voyou.)  With all of his tracks created on the same college-dorm studio set up, it seems fitting that we bring you the last from those late night bunker sessions and a brace dedicated to the end of his studies and the start of the party.

'Mom I Graduated! launches in to life with the sassily titled "Hit It." Spring loaded beats adorn an eerie, vocoder-aided atmosphere, before double claps on the beat turn the track into an intensified stomper. The drop descends into thick sub bass, chopped up vocal samples and chiming, echoing percussion around its half time rhythm. This is BIG!

Rain Dance starts life out of earshot.  A progressive melodic flurry gradually enters in to range through a mist of pitter patter FX touches, while ascending woodblocks bring us to the vocal drop and a thumping kick drum - "Im gonna make it rain" - Booty aesthetics with a slowed tribal rhythm and swathes of sub bass leak through the speakers. A second summer anthem from the young Californian.