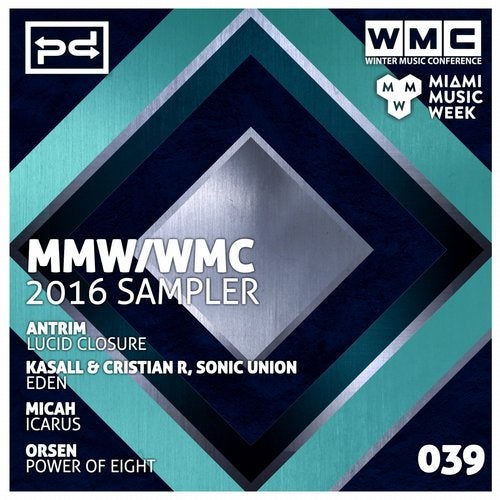 Darin Epsilon's Perspectives Digital returns for the 2016 edition of its hugely popular 'MMW / WMC Sampler'. Now on its third volume, the various artists series has proven to be a highlight in the label's catalog each year. In addition to consecutive Beatport Top 10 chart placings, the series has continually showcased some of electronic music's brightest talents. For the 2016 edition we see the label presenting new music from Antrim, Kasall and Cristian R and Sonic Union, Micah, and Orsen.

The release begins by welcoming Antrim back to the label for his third appearance. Known for his emotive take on progressive music, the Argentine presents his newest studio creation entitled 'Lucid Closure'. Beginning with a warm kick and wispy backdrop, Antrim quickly sets a killer foundation with mountainous slabs of bass. As the cavernous groove charges forward, a melodious motif begins to take shape amidst a wave of firing percussion. Ethereal in design, its emotional pull is undeniable, ultimately carrying the track into a break full of charming moments. As clustered keys continue to weave a magical narrative, the surroundings become increasingly intoxicating, before one final rush of white noise and bubbly textures takes you home.

The EP's second selection welcomes Kasall and Cristian R and Sonic Union to the label for their debut appearance. Hailing from Argentina and the United Kingdom respectively, all three boast appearances on Hernan Cattaneo's Sudbeat Music, and have also been featured in the sets of Nick Warren. 'Eden' marks their first ever collaborative project together and the fusion of their creative minds has resulted in one of this year's most special productions. Anchored by a wobbly groove, the track's hypnotic drawl is immediately appealing, while electric stabs and sweeping effects steal the air. Long vocal wails initiate the main break, bringing a soulful mood as the indistinct themes further captivate your imagination on to a blissful conclusion.

The sampler's third selection finds Canadian artist Micah making his label debut with 'Icarus'. With over 15 years in the underground, the Calgary native has been featured on some of the industry's most storied imprints, with Armada, Global Underground and Lost Language being the most notable. Beginning as a more subversive piece, the deep and harmonious 'Icarus' immediately sets an emotive tone. Warm textures, distinctive vocal samples, and strong musical motifs all combine for a magical first act. As the vocal narrative evolves, the jangly hooks continue to pull at your heartstrings. It's a masterclass in emotional progression and one that you'll remember long after the night is over.

The release concludes with a new production from Orsen, who is also making his label debut. Hailing from the UK but now based in Austria, Dan Baseley aka Orsen began the year with his 'Komorebi EP'. Released on Sudbeat Music, the five track collection reached #1 in Beatport's Progressive House chart, establishing Orsen as not only an incredible talent but a name to watch as 2016 unfolds. Now making his Perspectives Digital debut, Orsen presents 'Power Of Eight', a groovy progressive jam full of wonderful hooks. A funky foundation anchors the piece, while a three-pronged rhythm adds momentum moving forward. Kaleidoscopic keys set the lead motif, eventually initiating the main break, while soft textural overlays add just the right emotional touch. A slow methodical build paves the way for a rush of beats and drums, while the endless vortex of keys lifts the mood with each successive loop. Aimed squarely at the dancefloor, it might be Orsen's most accomplished work to date and certainly rounds the collection out on a strong note.