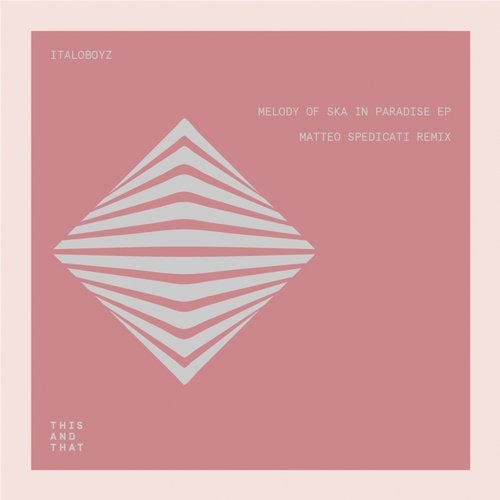 Davide Squillace's This And That Lab welcomes back the Italoboyz whose two original tracks on this EP are made in collaboration with Blind Minded, and come complimented with a remix by Matteo Spedicati. Also on the EP is a track by Marco Donato, who is one half of the Italoboyz' working under his solo alias Durant.

Originally from Italy but currently residing between London and Berlin, the Italoboyz are a duo consisting of the aforementioned Marco Donato and Federico Marton, whose clued-up house and techno sounds have brought them to esteemed labels such as Moon Harbour, Saved Records, Get Physical, Crosstown Rebels and their own label Superfiction Recordings.

Blind Minded, alongside solo releases on Jambutek Recordings, Natural Rhythm and Trapez Ltd has previously collaborated with the Italoboyz, compiling EP's for Oblack Label and Deeperfect among others.

Providing the solo remix, Matteo Spedicati dropped an EP on This And That in 2018, and also a collaboration with Frank Storm as part of VA. This time working on his own, other labels to have also featured his music include Hot Creations, Amam and Great Stuff Recordings.

'Back To Paradise' is first up. Focused around a tropical guitar riff, it's also wrapped in stripped back percussion with flickers of delay and building effects. Sensual and hypnotic, this understated cut has a sophistication that many will find appealing.

Matteo Spedicati provides the second track with his remix of 'Back To Paradise' that draws attention to the drums. Using the guitar as more of an ambient texture, this version has a chunky groove that's tailored for plays on a club sound system.

'Melodia di Sogni nel Vento', produced in tandem with hang instrument percussionist Paolo Borghi, is a track that's all about subtlety, with each change small but timed to perfection. The steel drums that flow freely are almost cinematic, and the expertly sequenced percussion compliments them perfectly.

Closing the EP is the trippy vocals and wonky bassline of Durant's 'Ska!', which also has filtered chord chops played on a guitar in the style commonly associated with Ska music, and has been appropriately titled to show this fusing of genres. Warped and brimming with individuality, the murky atmosphere of this minimal cut - a solo contribution from Marco under his Durant alias - showcases everything the Italoboyz are known for.

Melody of Ska in Paradise EP