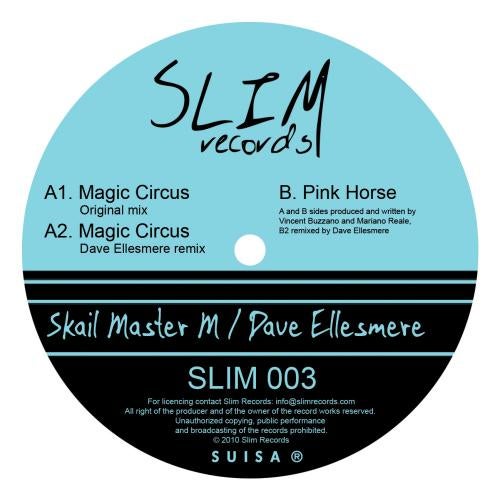 Already enlightened on late January by the Swiss techno duet's "Moon' s Rings EP", year 2010 starts brilliantly for the Skail Master M which returns on end February with the "Magic Circus EP", a, radiant, innovative release, brightly warmed up by an exclusive remix by Dave Ellesmere.

Well known electro techno from the lemanic area, Skail Master M emerged in 2001 from the encounter of two impassionate of sound, Vincent Buzzano and Mariano Reale. Soon, the pair built a wide success on the local scene, impressing the public with its musical productions full of a bright energy, and through electrifying live sets where those creations got improved by subtle, colourful percussions.

Involved with various labels - Global Records, Zoo Recordings - and associations dedicated to electronic music, the prolific artists already composed and produced many original tracks, from which an appreciable number were released, on CD and/or vinyl. They also went through remarkable live and studio collaborations with well known artists such as Beroshima, and have also been remixed by other DJs, only to mention Da Fresh and Ignition Technician.

Along those numerous personal and collective works, Skail Master M is also known for its creative live acts, given in such local clubs and event as the Zoo de l'Usine in Geneva, the Mad in Lausanne, the Electron Festival and the Street Parade, as well as in international cities, like Lyon (F), Pisa (I) or Rio (Br). All experiences that allowed the duo to gain their unique musical blend, a fresh mix of electro-techno, house and minimal, highly dominated by a vibrant sense of innovation.

Rich with various skills and competence, searching for a new artistic freedom offered by its move to the young Slim Records label, Skail Master M keeps on building its successful trail with a fresh collection of eclectic and ground-breaking creations. A creative suite which will extend, by mid/end February to the "Magic Circus EP", a new pair of acrobatic tracks spiced up with a virtuose remix from Dave Ellesmere, an electro techno house British maestro based in Berlin.

Keeping for himself the deep stream of "Magic Circus", an hypnotic, spinning first track of this techno impregnated EP, the brilliant DJ, known for its refined vision of de Detroit wave, profoundly redraws the piece's rhythmic and harmonic loops, juggling with its beats and sounds to deliver a rich, fiercely decadent version of it, without perverting its basic structure.

To this luxuriant re-creation opposite extreme, "Pink Horses" concludes on a clear, subtly repetitive note, shaping its undulating tempo into a synthetic allegory of the merry-go-round infinite, colourful race. A poetic evocation which opens additional doors on Skail Master M musical inspiration, as the duet is already on the trail to some new electronic Utopias, to discover soon on the label Slim Records.

Available on all good store like Junodownload.com, iTune, Beatdigital, etc...

And for vinyls lover -> DECKS.DE