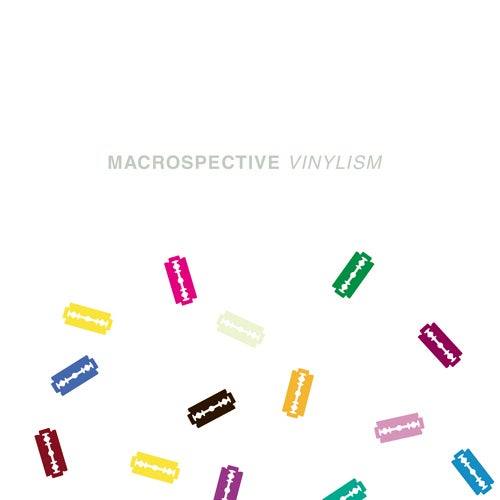 Macrospective Vinylism enables digital DJs to play the key tracks of Macro with the sound of vinyl without actually having to carry a box of records around. All vinyl versions are direct transfers from mint vinyl copies of Macros carefully mastered and cut releases. This allows for mixing digital files with real vinyl without huge set offs in sound caused by switching between formats, granting DJs a new tool for enhanced performance and ultimate freedom of choosing and combining their tools. The vinyl effect is often misunderstood: vinyl doesnt have better resolution or dynamics than high end digital formats, but rather colours the sound in a specific way. Due to the mechanic interaction of needle and record, geometric distortions add harmonics to the spectrum, causing a more brilliant high end and an artificially enhanced stereo image. In addition, the low end is set to mono, often granting a solidified bass foundation. Decreasing resolution from the outer side of the record to the inner end lets a new track mixed in by the DJ shine with greater high end reproduction, adding perceived freshness with every new track coming in. These effects are built in in Macros Vinyl Versions: played back on Technics decks with Ortofon needles and recorded using premium pre-amplification and AD conversion, they hold exactly the sound features you would get in a typical club set up. Hi Fi needles and studio turntables have explicitly been avoided in order to enable ultimate sound compatibility with vinyl in a club setting. With WAV files and high end conversion, the DJ has never been so close to the classic vinyl sound of the great club music tradition without actually being restricted by the record. This way the additional tools provided by cutting edge DJ software become conveniently available to those who prefer the vinyl sound over clean digitally mastered tracks.