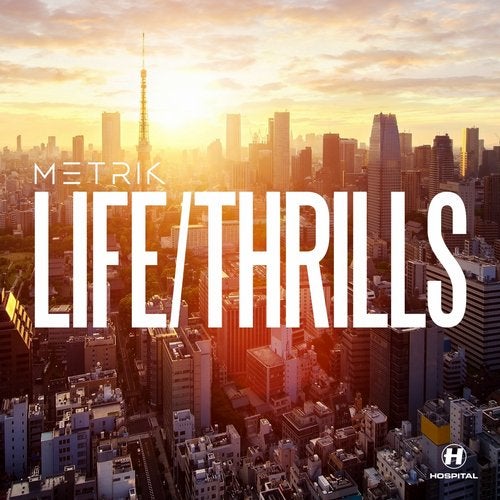 Metriks highly anticipated second album LIFE/THRILLS released on Hospital Records is an exhilarating and flawlessly executed evolution of his signature sound. Under the banner of drum & bass it draws on his love for film soundtracks, synthwave, neo-soul and the Japanese pop sub-genre, Shibuya-kei and includes collaborations with Elisabeth Troy, NAMGAWD, Romeo Testa, Ragga Twins, Rothwell and Reija Lee.

Electric Echo, a collaboration with Fightstars Dan Haigh and Alex Westaways synthwave side project Gunship, encapsulates the ethos of the album merging the unfamiliar with D&B sensibilities to create a fresh and exciting new sound. We also welcome the return of Elisabeth Troy in 'Chasing Sunrise' and Reija Lee in 'Cadence' making for two powerful vocal highlights on the record. For those of a purist nature, fear not; Metriks sophomore album is one hundred percent drum & bass and he hasnt forgotten about the dancefloor. Bangers like 'Western Jam', 'Fatso' and 'Destination Earth' make up a serious proportion of the albums generous fifteen tracks and reinforce his status as one of the heaviest producers on the block.

Over the past year Metrik has travelled the world representing drum & bass at major festivals of all denominations; from Glastonbury and Global Gathering to Outlook and EDC Las Vegas. All the while crafting remixes for the likes of DJ Fresh, Ellie Goulding, Gorgon City and Martin Garrix, and collaborating with fellow D&B superstars TC and Netsky. Fans of his UK Dance Chart Top 20 debut 'Universal Language' will find plenty to love here however its Metriks devotion to creating a fresh and thrilling strain of drum & bass that stands to bring in a new audience and earmark 'LIFE/THRILLS' for instant classic status.