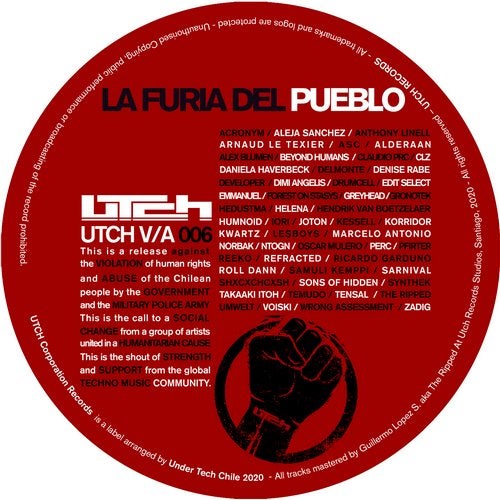 This is a release against the violation of human rights and abuse of the Chilean people by the government and the military police army.
This is the call to a social change from a group of artists united in a humanitarian cause. This is the shout of strength and support from the global techno music community.

La furia del Pueblo is an album that we have been working on for almost two months in which artists from different places of the world have collaborated, to demonstrate the union and support that is being given to the people from Chile, who has been fighting and demanding dignity; but at the same time being vilely repressed by military and armed police that has abused and violated human rights in countless occasions, the current government and particularly President Sebastian Piñera being the absolute culprit of everything that has been happening.
This release aims to make all this go out to the world and that people know that we are united and support this type of instances, that we are not only producers or djs thinking about parties, drugs and excesses as they want to make us see the media normally.
Adicionally the money left by the sales in digital format of these tracks will be given to people in a street situation in the form of food and shelter, since they are the most unprotected, because they have absolutely no help from anyone. A few years ago we worked with an Ong and we do not like how they work, they were very transparent, so we will do this work with our techno family and friends, as we have done since the movement started, there are many ways to help and this It can be one more.
It is time to give a furious shout through techno music and show that we are just parties and drugs as they usually stigmatize us. La Furia del Pueblo is a shout of strength and support from several of the most influential artists of techno music yesterday and today managed and runned by Utch Records and will be available on December 30 in our bandcamp and from January 17, 2020 on all digital platforms.

UTCH Corporation Records is a label arranged by Under Tech Chile 2019.
All tracks mastered by Guillermo Lopez S. aka The Ripped At Utch Records Studios, Santiago, 2019. With the exception of the tracks by Oscar Mulero, Aleja Sanchez, Edit Select, Ntogn, Hendrik van Boetzelaer, Pfirter, Zadig, Dimi Angelis, Reeko and Temudo .

All rights reserved – UTCH RECORDS - All trademarks and logos are protected - Unauthorised Copying, public performance or broadcasting of the record prohibited.