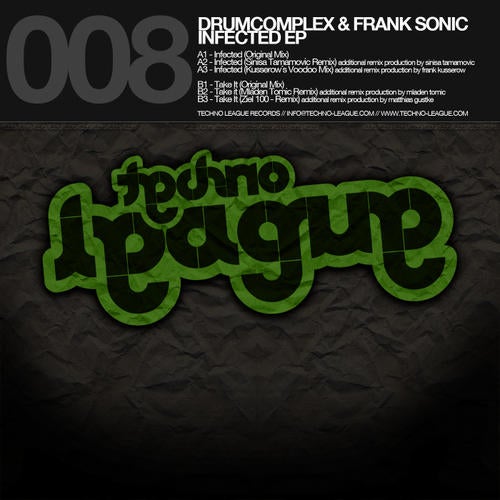 The new techno league is made by Drumcomplex and Frank Sonic. It has been without any doubt the most successful project since the start of the label in 2008.Each of the two subversived DJs deliver with Infected and Take it two bustling techno-tracks, which will work at the prime time and as tools on the floor as well. Infected is persuasive by its tremendous beat-out power: trembling bass rolls meet to a point that you will be shaken with emotion and it will really hit your body supported again and again by snare rolls and a striking synth sound. Take it is funky and fresh a kind of modern Techno, tightly pulled through by cool wood blocks and sombre vocals.The appropriate remixes aren`t less interesting. There was a new version of the A-page put in the limelight by Sinisa Tamamovic of Croatia and Frank Kusserow . The last mentioned has already been known because of his first class releases on labels as Datapunk or Whitenoise. On the B-page Mladen Tomic supplies a real monster-remix that forces each sound system, maybe as fat as can be into its knees, while the DJ-legend from Frankfurt, Ziel 100, with his very slight rework is offering a further, good dub techno-alternative.