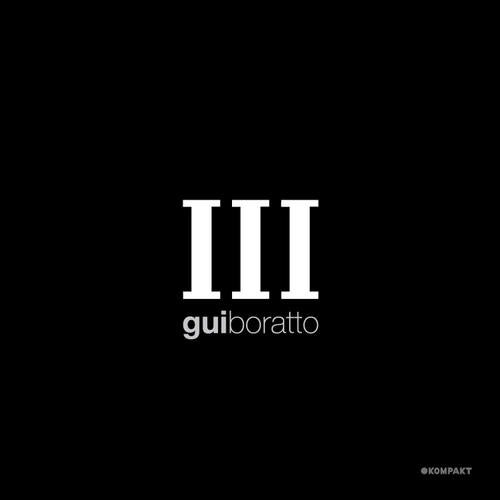 artists: Gui Boratto title: III label: Kompakt format: vinyl/ CD/ Digital catalogue no.: KOMPAKTCD90BEA barcode: 880319062520 release date BEA : 12 September 2011 TRACKLISTING: 1. Galuchat 2. Stems From Hell 3. Striker 4. The Drill 5. Flying Practice 6. Trap 7. Soledad 8. Destination: Education 9. Talking Truss 10. The Third 11. This Is Not The End (feat. Luciana Villanova) 12. Blackjack´s Primetime RELEASEINFO: Gui Boratto is truly that success story that aspiring dance producers dream of. From his Brazilian home of São Paolo as a student of architecture and design, he quickly found himself in the position as one of the countries primary pop/rock producers (including work for Steel Pulse). It was with his 2005 debut Kompakt release on the K2 sub-label Arquipélago that shot him into prominence and paved a strong path of singles that led to the now classic full length Chromophobia. The lead singles Mr. Decay and Beautiful Life remain two of the most unforgettable tracks in Kompakt history - the latter official video with well over a million views on YouTube. It was his sophomore album, the 2009 breakthrough, Take My Breath Away which evolved him as a dance producer further into a realm of his own right as one of Brazils most established musicians. His remixes for Pet Shop Boys, Massive Attack and co-producing Bomb The Bass further demonstrate this tremendous talent amongst us. Following a world-wide rollercoaster of almost 3 years continuously on the road touring, Gui Boratto found himself back in his São Paolo studio in early 2011. The results are here with III arguably his greatest musical accomplishment to date. Kicking off with the slo drive Galuchat the sitar-ish instrumental embedded in the track sets a foundation of melancholic organic groove found throughout III. Stems From Hell will not disappoint the die-hard fan his masterful approach to the maximum and minimum of sound variation is pure peak time. Striker was originally intended for his second full length but was left on hold and fortunately completed for III. Featuring vocals from Gui Boratto himself, his contagious bass line has no limit recalling the likes of Echo And The Bunnymen. Gui began III with The Third a gorgeous play on the four/four pattern that suddenly moves from eight bars to only six. Hi-hats become almost shuffle like in their flow. Gui Boratto said about going into producing The Trap that the good thing about doing an album are the possibilities of experimentalism. He lets his instinct totally flow as a Rhodes, Piano and Tremolo Guitar converse with one another. Beauty and sadness remarkably collide. A sure album highlight, Destination: Education marks the return of his wife Luciana Villanova on vocals (who also sings on Beautiful Life). A 119 techno/house crooner that will be a surefire favorite on the modern dance floor. Gui lovingly alikens Flying Practice as a part of the three bars that grace the album cover. Classic trance chording build a variety of moods and builds. A French horn make the transition and conclusion. Soledad is directly inspired and pays homage Astor Piazzollas Soleda and ironically a little of Duran Durans Save A Prayer. This journey ends off with This Is Not The End an indie minded track that demonstrates how masterful Gui Boratto has evolved his signature sound into something quite monumental. Again, Luciana Villanovas beautiful vocals captures the spirit of what Boratto brings to life. Rounded off with a final synth that makes you feel that something WILL continue not end. Gui Boratto will be touring with a new live show full of many surprises in support this fall. Its inevitable he will come to your town and with that comes a sense of magic and hope which his music forever shall relate.