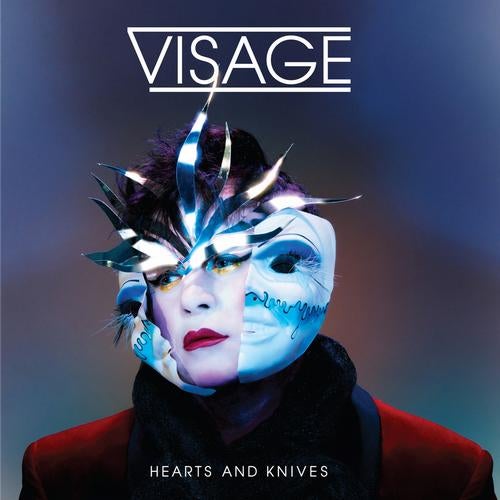 Founding fathers of the New Romantics and pioneers of the 80s sound Visage, return with a new album 'Hearts And Knives'. "It has been 29 years since the last Visage album and during that period it often seems like we have all lived through several lifetimes" comments Steve Strange, the bands creative force and flamboyant leader singer. Visage began in 1978 when Steve Strange and Blitz Club partner-in-crime Rusty Egan joined forces with Midge Ure to create a futuristic, synthesizer-led group where style and fashion were matched by experimental but accessible music. The group was soon augmented with members of Magazine (John McGeoch, Dave Formula and Barry Adamson) and Billy Currie. They recorded their first single Tar with Martin Rushent at his Genetic Studio in 1979 (shortly to become the birthplace of the Human League Dare album).

Their breakthrough track "Fade To Grey" became a European hit and reached number 1 in eight countries in 1980. The band then enjoyed a series of hit singles "Mind Of A Toy", "Night Train" and "The Anvil" coming from a pair genre defying albums, the eponymous "Visage" in 1980 and "The Anvil" in 1982. In 1981 Ultravox now led by Midge Ure took off and in 1982 Midge and Billy left to concentrate on what would become one of the biggest bands of the 80's. In 1984 Visage made their 3rd album "Beatboy". As the public face of the band Steve Strange shot to stardom throughout Europe he continued to be active in hosting club nights (The Camden Palace, Club For Heroes) and in the fashion world.

In 2010 Steve reconnected with Steve Barnacle and began writing songs once more. Some time later ex-Ultravox guitarist Robin Simon joined the equation, bringing not only a large slice of shared musical DNA (that "Visage sound") to the project, but also his own distinctive style and ethereal musicianship. Vocalist Lauren Duvall was invited into the fold, adding not only her sultry vocal ability but a slice of the classic Visage glamour too. With the core members in place the picture slowly started forming and the band reached out (once again) to Martin Rushent. He suggested the blueprint for the album and had began working on the first tracks before his untimely death in 2010. The "Hearts And Knives" album is dedicated to Martin.

The album features collaborations and contributions from Dave Formula (former Visage and Magazine keyboard player) , Mick MacNeil (the former keyboard player and creative musical core of Simple Minds), 80s super producer Youth, Rich Mowatt and Logan Sky. The sound of Hearts and Knives is "classic Visage" but with modern songs and style. There is the odd tip of the hat to modern production values but the sound is 1980-1982 Visage. It's Vintage keyboards and synthesizers all the way. There's not software synths on this record! The production by John Bryan and analogue synthesizer collector Sare Havlicek is firmly rooted in the 80's. Many tracks of the tracks are instantly recognizable as Visage (Moogs and the obligatory CR78 drum sound feature on several).

Visage (French for "Face") has always been one part music to one part style & fashion. In 1980 the explosive combination of then futurist synthesizer music, fashion, make up & gender ambiguity set the blue print for the New Romantic movement and eventually the style template of the 1980's. Visage was one of the bands to evolve out of the famous night club the Blitz Club, created and hosted by Steve Strange and Rusty Egan. Other bands included the infamous Spandau Ballet and Culture Club.

Innovative style, clothing and make-up continue to be central to brand "Steve Strange". In a series of style looks for the album he has collaborated with designers Haus of Gaga, Sorapol, Mark Fowler and long time collaborator milliner Stephen Jones OBE. The first album cover in 1980 was shot by veteran music photographer Peter Ashworth in the Blitz Club. Peter returns to shoot the cover of the fourth album. The shot references the famous "Fade To Grey" white face & water motif now displayed on a mask created by Lara Himpelmann. The current day Steve Strange bursts through the mask in a blaze of sliver & red.

"Hearts and Knives" may have been a long time in coming but it is a purposeful statement of just where Steve Strange and Visage are at present. The past has been full of highs and lows but musically & creatively they are at a point where they can confidently present an album containing all the strands of their unique mix of music, fashion and style.