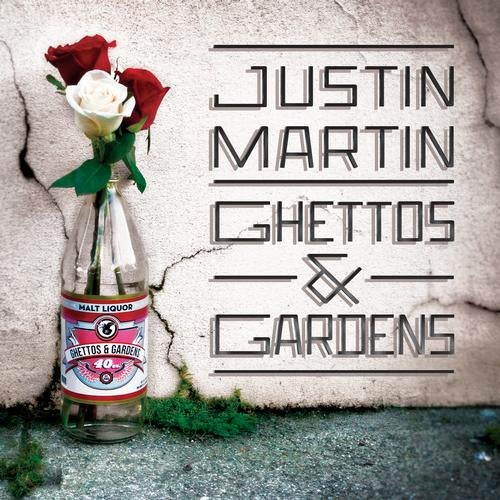 Justin Martin made the very first release on dirtybird records in 2005. Seven years later, he delivers his long awaited debut artist album with the very same smile and fun loving attitude he's had since the beginning. 'Ghettos and Gardens' is exactly as advertised - a tender and tough collection of songs that build you up with sweeping strings, then break you down with earth shattering basslines. It's sunsets vs. cyclones, roses vs. razors, and bunny rabbits vs. wolverines. Maybe it's the streets of San Francisco that made his music this way - a place where you can see a beautiful woman and a crippled homeless addict on the same city block. Maybe it's the juxtaposition of the famous dirtybird Golden Gate park parties, where Justin's loving parents make tacos and chop fresh salsa while total freaks lose their minds in front of the massive sound system. Not a whole lot of producers are just as influenced by E40 as they are by LTJ Bukem, and even fewer of them played the jazz saxophone in high school. Whatever is going on, most people would say that Justin is one of the most charismatic likable DJs to walk the earth. In this album Justin demonstrates his unique ability to blur the lines between musical genres, taking us through beautiful melodies, UK basslines, moody funk and devastating drops. You can hear the meticulous production techniques in every track - from the slow Hip-Hop style of Hood Rich to the heavy duty low-end of Molokini. The whole thing is fresh and uplifting like the smell of ozone after a lightning strike. Ghettos and Gardens sounds like nothing else out there - it could not have come from anyone but Justin Martin.