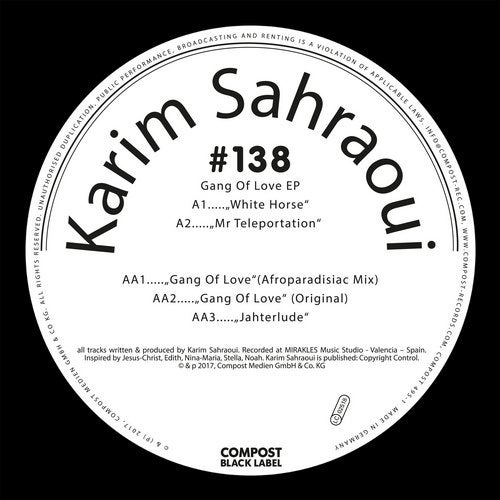 Supertalent, new star at club heaven...: Karim Sahraouis 12 on Transmat was his breakthrough last year. Youll find also one track on Composts Future Sounds Of Jazz Vol. 13. On this stunning EP hes showing his skills and variety from Detroit Techno to jazz-/ balearic influenced house to glistening downbeat. Musical, technical, mixturewise: a tipp top EP. About Karim Sahraoui: Karim Sahraoui is synonymous of sublime technique and sound quality. In his vast musical career, Karim Sahraoui has been producing gems for many years under various names such as Djinxx, Soul Monkey and Electronique Resistance with whom he has released on labels such Bedrock, Cocoon, Delsin, Ovum to name a few. After a break 2014 saw his return to the business under his real name and producing music that is closer to him than ever. Releases included the future classic Eternal Life EP pt 1&2 on Derrick Mays Transmat and appearances on labels such as ARTS/Cocoon/OFF. Undoubtedly a musical discourse with no expiration date! About the tracks: White Horse - This is a brand new composition it has been made in Valencia (Spain) in my new location. White Horse has this captivating/floating jazzy approach that i'm really into now. The atmosphere is just sublime. And also it has a long construction fine to mix it out. Mr Teleportation - This track composed in the south of France back in 2008. It was previously released in 2013 on Transmat's Japanese only CD Compilation "Beyond The Dance". This track is very special to me because it was made the year of my first daughter's birth. And glad to give it a "real" life on vinyl & digital through Compost! Gang Of Love (Original Mix) - This composition has something really cinematic. I could see myself hanging in the streets of NYC back in the 70" but with a modern approach. I personaly really like this track. Definitely one of my favorite. Gang Of Love (Afroparadisiac mix) - I wanted with this version to use more acoustic elements and create a mixture between Jazzy and Afro sounds while keeping it danceable. The kind of I call it "Brazilian" break puts a fresh and low atmosphere at some point. Jahterlude - This track has been made in Kuala Lumpur (Malaysia) back in 2011...I wanted to try to make something different that i usually compose. More acoustic with some Jamaican flavors. I think it turned well! Links: www.facebook.com/KarimSahraouiOfficial/ https://soundcloud.com/karimsahraoui