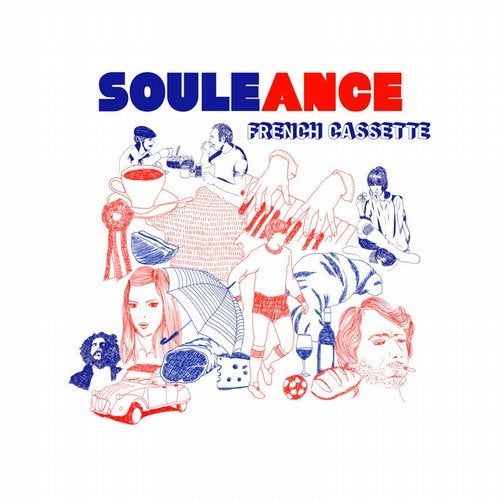 First Word Records is proud to present a new full-length project from Souleance!
Following on from 2013's acclaimed 'La Beat Tape', the Parisian duo return for 2019 with 'French Cassette'.

As well as the recent single 'Francois / 'Sete' (both included), we have 25 new tracks dedicated to all things Francais. This mixtape opus is a true labour of love; A French voyage through time and genres, as Soulist and Fulgeance like to do. Each track is purposefully named after various French cliches; characteristics, phrases and places. You'll excuse our French, and check those out for yourselves..

'French Cassette' is comprised of an array of noises from various French composers; from boogie, to jazz, to sound libraries, to chansons. Cinematically sultry sounds, with a lot of funk; where Brigitte Fontaine meets Francois de Roubaix in a back alley somewhere near the film set of Calmos, whilst pumping out the soundtrack to La Haine. A little moody, a little sexy, a little rough around the edges.

Whilst the film noir-esque interludes accentuate the theme, Souleance's unmistakable grooves ride throughout, with a symphony of synths and scratches, beats and basslines. This is undeniably, unashamedly a celebration. Boom bap and breaks, all flavoured with a healthy layer of "je ne sais quoi".

'French Cassette' is available on limited edition cassette & on all digital platforms.