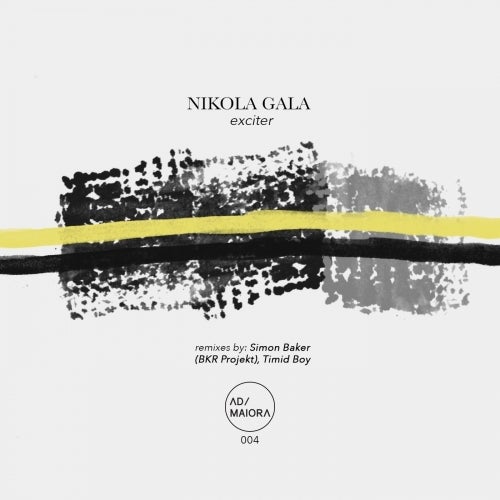 Up next on AdMaiora is something bigger than ever. We’re honored to see Nikola Gala making his first appearance with ‘Exciter EP’, landing on our ground with two original productions. Nikola is a DJ and producer from Greece whose releasing pure techno bombs since 2000 on labels such as ‘Ibadan’, ‘Rekids’, ‘On Edge Society’ and ‘Noir Music’ to name a few. His latest track is called ‘Exciter’. Side A is the perfect fusion between tech house grooves and techno atmospheres: female vocal loops, bigroom synths and silken pads make of this track a true raw gem. On the other side, ‘Exciter B’ got one of the most important support of the last year, and has been hammered by Loco Dice himself in the legendary Essential Mix on the worldwide famous BBCRADIO1. This one is darker and deeper than the A side but you can still find Nikola’s attitude on producing filthy techno grooves. Taking care of the business remix section we have Simon Baker (Kompakt, Truesoul, Last Night On Earth) under his ‘BKR’ alias and Frenchman Timid Boy (Saved) whom both rock on their version of ‘Exciter A’.