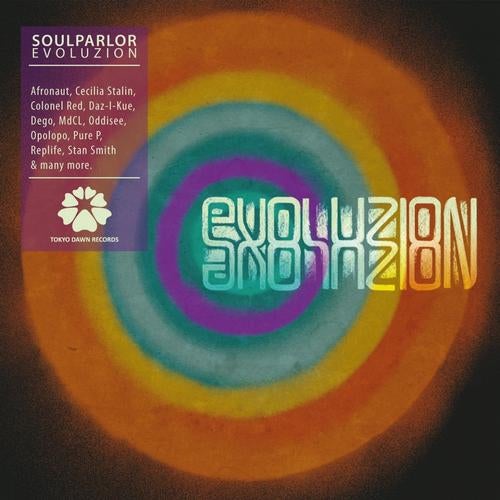 Welcome to SoulParlor! As protagonists of the international broken beat scene for more than 15 years, this German-based production and DJ collective intends on seriously effecting your minds and bodies with their sonic fusion of bass culture, house vibes and hip hop grooves. After two dozen single releases, club residencies all over Europe, music scores for Mercedes-Benz and MTV, successful remixes for James Brown, Juan Aktins and so much more, it's high time for their new album to drop. 'Evoluzion' is backwards for 'Noiz U Love' and reflects the musical range of their incredibly eclectic DJ sets. Conceptualized as a truly collaborative album, all 19 tracks feature SoulParlor's music partners over the years, who for the most part came to their home studio in Mainz to create in the flesh. Guest vocalists featured include Cecilia Stalin (Koop), Jacob And The Appleblossom (Wagner Love), Colonel Red, Oddisee, Replife, Stan Smith and others. Even the bonus remixes are delivered from longtime collaborators from West London and beyond including legends of the underground such as Afronaut, Daz-I-Kue (Bugz In The Attic), Dego (4hero/2000black), MdCL, Pure P (Raw Fusion) and TDR's boogie maestro Opolopo. This evoluzion just started! QUOTES: - "It's a real fight to re-breathe broken beat and it's been done effortlessly. An amazing album!" - Atjazz (Atjazz Record Company) - "Excellent! Amazing line up with amazing beats!" - Anthony Valadez (KCRW LA) http://www.tokyodawn.net/soulparlor-evoluzion/