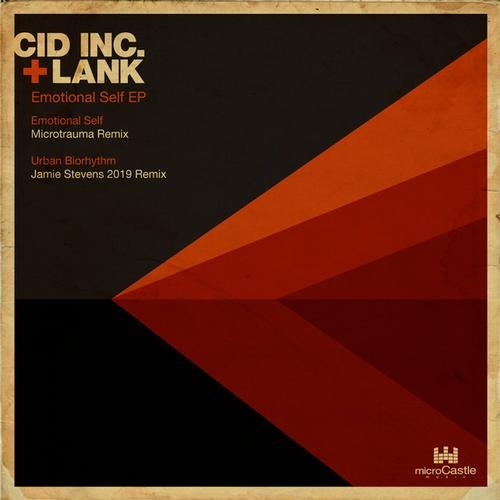 The 24th release on microCastle sees two of electronic music's most loved producers Henri Hurtig aka Cid Inc. and Peter Goylan aka Lank back together for 2 more studio collaborations to follow up their 'Our Benefactors' EP from October of 2010. The 'Emotional Self' EP comes with two new original productions and remixes from: Microtrauma and Jamie Stevens. The 'Emotional Self' original gets the EP off on a very serious note. Cid Inc's titanium coated beats have never been more poignant or impactful. Jagged subby tones and a profoundly subversive bass line that reaches rib cage breaking depths sits at the foundation. Draped with sheets of percolating effects a futuristic and deeply thought provoking set of tone bending chords wash over the composition which creates a rather daunting and ominous mood. The composition peaks following an unsettled and foreboding breakdown with the lead chords warping and twisting their way to a momentous sonic conclusion. The lone remix of 'Emotional Self' is provided by the German based duo Microtrauma who are famed for their outstanding productions on Traum; most notably 'Circulate'. Their recent 'Reflection' EP also on Traum has been heralded by many melodic techno fans as the EP of the year thus far and has earned serious praise from Hernan Cattaneo. 'Emotional Self' has been reconstructed by Microtrauma into a more techno inspired piece. The moody theme from the original is maintained and presented with a tougher and even more warped sensibility which should wreak havoc on even the most discerning dance floors. Microtrauma's dynamic fills, futuristic sound design and ultra sharp transitions lead to a tension filled drop that climaxes with a seriously buzzing groove and an enthralling finale. Already charted by Hernan Cattaneo Microtrauma's 'Emotional Self' remix looks to go down as one of their coolest productions all year. The second original on the package 'Urban Biorhythm' comes with a rolling, cavernous bass line and an undeniable big room feel. Themed around an irresistible synth hook and a tone trembling tension filled drop 'Urban Biorhythm' has turned out to be the perfect complement to the more heady 'Emotional Self'. A Dub version of Urban Biorhythm has also been included which focuses on another one of Lank's rumbling grooves and layers of momentous hypnotic rhythms. The lone remix of 'Urban Biorhythm' is supplied by Jamie Stevens who has achieved an amazing level of critical and commercial success over the course of his career. As one of Australia's most talented and sought after music producers, he has proven his skill in professional sound design, music scores for film and contemporary dance music. As the founding member of Infusion, the much-loved Australian electronic live act, he's left his mark around the globe, headlining some of the biggest and most respected clubs including; Fabric- London, Pacha - Buenos Aires, Womb- Tokyo and festivals such as Glastonbury, Coachella, Roskilde and Creamfields in Moscow, Brazil, UK and Argentina. In his home country, Infusion received 2 prestigious ARIA awards for their work. Here at microCastle we've been huge fans of Jamie's for years so we were thrilled to finally find a project for him. For his 'Urban Biorhythm' interpretation Jamie has completely overhauled the huge progressive original into a funky, wobbly, orchestral techno mix for the ages. An irresistibly chunky groove is complemented with gorgeous piano accents, shuffling drums and panoramic, widescreen synths for what results in one of Jamie's most unique and inspiring studio creations to date. An understated anthem for the ages from Mr. Stevens and a perfect close to Cid Inc. & Lank's second EP for microCastle.