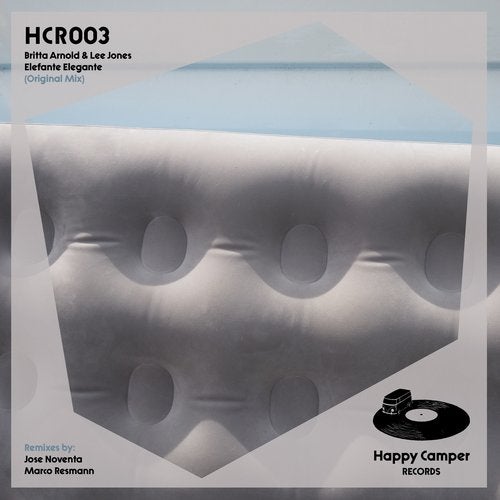 DJs are a nomadic people. Drifting between venues, airports and hotel rooms, they're always on the hunt for new music and clubbing activity. They are, indeed, the Bohemians of the 21st Century. Or as Britta Arnold, unders and Noraj Cue would call them: Happy Campers.

With its continuous stream of delightful dancefloor fodder, Happy Camper Records is slowly but surely manifesting itself as one of Berlin's hottest new labels. After two critically acclaimed releases by Noraj Cue and Jake the Rapper, it is now Britta Arnold's turn to stir things up. The KaterBlau resident and Happy Camper extraordinaire has teamed up with Watergate ledge Lee Jones (MyMy, Quantum Entanglement) to bring you Elefante Elegante - a monster of a track, backed by a powerful Pink Hangover, and remixed by two of Berlin's finest.

Elefante Elegante is a remarkable floorfiller, a mesmerizing musical journey of playful chords echoing over a relentless groove. Watergate resident Marco Resmann has given the original more of a techno flavor, with one of his signature break-glass-in-case-of-emergency remixes. Pink Hangover has a dreamier approach. It's like coming home after a long raving rampage, watching the sun rise through your cracked window, pondering. Jose Noventa takes it down a notch, only to take the dreaminess up a notch or two.

Happy Camper 003 has a suitable soundtrack for each part of your extended weekend. Could it be because all of the contributing artists are residents of the world's undisputed rave capital? Is it a Berlin thing? Probably.