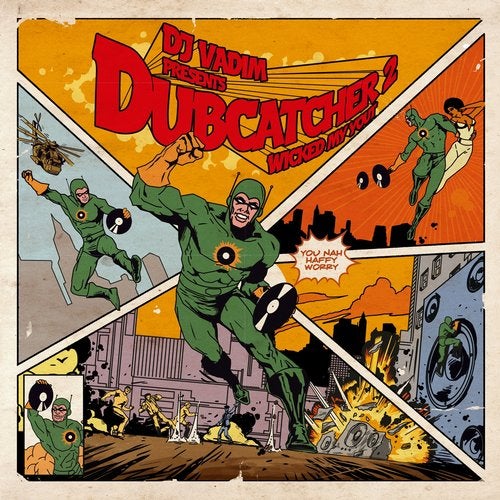 Some things improve with time and experience like internet speeds or smartphones. Some movie sequels are better than the original, think more «The Empire Strikes Back» than «Jaws 2». And so comes the bold musical sequal to the last Dj vadim aka ,Daddy VAd solo album Dubcatcher 2. This is vadim s 11th official album. Yes 11! Quite incredible these days considering most people s attention span is similar to a mosquito. How does an artist in 2015/16 keep going and remain relevant without diluting their craft ? And how does one improve on its predecessor? Well, in this case it s about evolution ,fusion and turbo injecting the swag. A new label Soulbeats Records and new energy combined. Vadim, in his super hero outfit, comes to take us on a Luke Skywalker like, adventure to fight the baddies (Babylon federation) in his musical kitchen. He takes well known ingredients like reggae, dub, ska, mixes in some hip hop, soul, jungle and adds some big bass lines to spice up the mix. Yes the roots of the album are founded in Jamaican music but this is no wannabe copy... Like Nice n Smooth said it s the «old to the new». Legends like Max Romeo and Earl 16 are joined with new upcoming artists like Eva Lazarus and Tman. Reggae jungle maestro s Demolition Man, and General Levy join UK grimey rap spitters Metropolis (Foreign Beggers), and Jman. The Gilles Peterson touted soothing voice of Junior Williams to the French Raggasonic vibes of Big Red and Mr Stand High Patrol and Mungo s HiFI affiliate Pupajim. In fact this is more than just a reggae record. This is retro but also forward thinking. Think Massive Attack s first album vs Wiley. Sly n Robbie vs J Dillah. Throw in a some powerful soul with big drums and you aint far off. It sounds a bit cheesy to say but it s something for everyone, this album really does touch many spots from being politically aware, social commentary, sufferation messages to straight up good vibes and bad habits. « I am not reggae, I am me. I am bigger than the limits that are put on me. It all has to do with the individual journey. » Ziggy Marley.