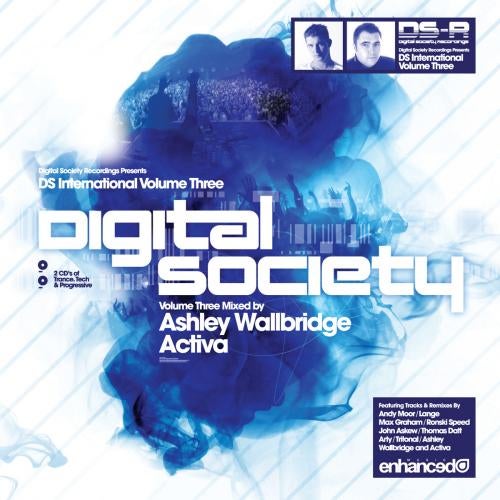 Digital Society has become firmly established as one of the UK's leading specialist Trance brands, recently being crowned Mixmag's 'Trance Club of the Year'. The past 12 months have seen an immensely successful events programme across multiple venues in the city of Leeds which has seen global superstars feature such as Above & Beyond, Sander van Doorn, Gareth Emery, Cosmic Gate, Andy Moor and John O'Callaghan to name just a few, and has also seen event collaborations with dance industry giants Judgement Sundays, Godskitchen, The Gallery and Anjunabeats. With recent news including DS are to host the main arena this year's UK Indoor Dance Festival, an Asian residency with India's freshest Trance brand Evoke, confirmed specialist autumn shows at the O2 Academy Leeds, and the exciting partnership announcement with Enhanced Music and Assured Artists, 2010 is set to see Digital Society hit new heights. After 2 highly acclaimed DS International compilations mixed by Matt Hardwick and John Askew, DS-R looks to the future with super producer talents Ashley Wallbridge and Activa heading up the much anticipated DS International volume 3 release.

Ashley Wallbridge is undoubtedly one of the most prolific prospects on the progressive production scene in 2010, named by industry leaders such as Andy Moor and Gareth Emery as one of the hottest break-through DJ talents in the game. At just 22 years old, his discography reads like a 'who's who' list of EDM with releases of originals and remixes featuring names like Ferry Corsten, Markus Schulz, Tritonal & TyDi. Ava Recordings release 'Faces' the 2009 collaboration with Andy Moor, fast became one of the biggest titles of the year and dominated download charts worldwide, closely followed up by club hit original 'Chimera'. With a hectic tour diary covering London to Los Angeles & Argentina to Australia, Ashley has become an extremely in-demand DJ, with his name set to hit the bright lights on billboards right across the globe.

Activa (Production maestro Rob Stevenson) is a man on fire. Labeled by Paul van Dyk as his producer of the year, Activa productions have appeared on Spinnin, Discover, High Contrast and of course the mighty Vandit Records - which has seen Activa tracks & remixes feature in sets from the biggest names in the industry. 2009 saw the tech-trance titan complete his first and highly acclaimed artist album 'This World', and has worked with the likes of Giuseppe Ottaviani, John Askew & Jon O'Bir in recent times. Coupled with new projects on Anjunabeats (under the Solar Movement alias), and with Dave Parkinson under his Revelation 9 guise on Activa's very own brand new, independently run label, Borderline Music - a label which is set to take the Trance scene by storm. Alongside tour dates in Europe, Asia, and the US throughout the calendar year, Rob's renowned UK residency with Digital Society is held in the highest regard.