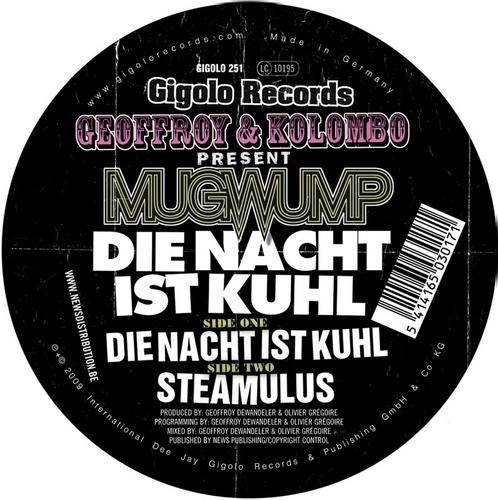 Gigolo Singles come thick and fast these days, and the latest offering from Geoffroy and Kolombo pioneer’s the Disco/Techno sound we last heard on ivano coppola and Christian prommer’s ‘Hot’ release. Relentless in arrangement, always engaging, with a big US style production-sound that is quintessentially European and quite possibly could only come from Belgium; this is the sound of Mugwump!

Geoffroy and Kolombo aka Mugwump are native Belgium and undoubtedly tread the same boards as fellow countrymen The Glimmers, 2 Many Djs and more recently Aeroplane. With releases on Eskimo, a residency at Fuse club and their own imprint part of the infamous and revered NEWS distribution/hit factory their Geographic Mapping is unmistakable. But what about the Genetic evidence? Or the DNA of their sound? Taking in a range of musical influences and producing a unique sound is the formula, and Die Nacht ist Kuhl is possibly the best example of this. Disco Loops, Latin rhythms, a classic vocal-house sample, heavy techno synth stabs and a German Spoken word poem that names the Rheine is the introduction to this two track EP. The B-side side is a slightly more reserved affair making way for some nice mood music with a modulating disco loop that infectiously builds for most of the record, and then lets go with heavy bass lines that delivers the big pay-off.