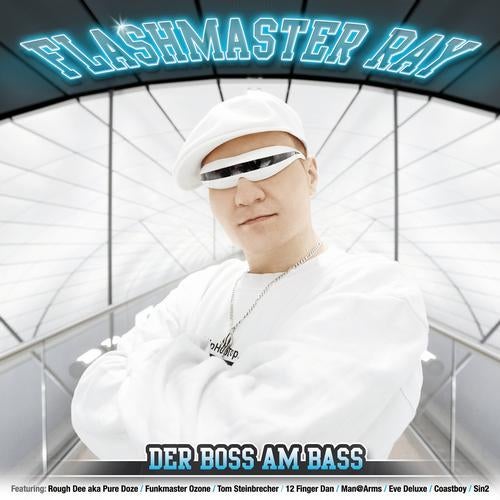 For more than 20 years Flashmaster Ray belongs to the architects of the Hamburg hip hop scene, being one of the first hip hop deejays in the Free and Hanseatic German City of Hamburg.

He started his career at the beginning of the 1990s as a deejay and on the local radio and TV-shows. Numerous musicians from the German charts were guests in his shows.

After being deejay and beat producer for so long Flashmaster Ray is now keen on presenting the hip hop world and electro music scene his proper album!

Some call this style Hip Hop and others call it Electro-Music. Embark now on an electronic tour throughout bass sounds which surprisingly are digital but still analog.

This producer album, named modestly "Der Boss am Bass" is Flashmaster Ray's debut album, being in Germany at the same time Hamburgs first hip hop electro funk album. The beats are based on the legendary 1980s drumcomputer Roland 808. The raps und vocals are composed up to 90%% of vocoder, speech synthesis, talkbox und speech distortion. The tracks go with German and English lyrics.

If you like minimalist electronic sounds and the 1980s beat you will enjoy this album to the fullest! No lover of electronic bass music in the 1980s style could drop this release!