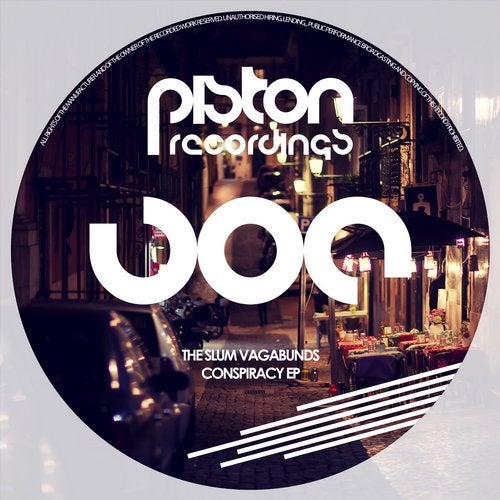 Lisbon based music duo The Slum Vagabunds aka Syper and Vanhel return to Piston with delicious Conspiracy EP. Syper and Vanhell's first outing here - Solace EP - was very well received indeed with a lot of support and, no doubt this newest effort will follow suit. The guys got together back in 2011, which is also the year they joined Fuse Records. They share a common identity strengthened by eclectic tastes and a creative freedom that allows them to run all the spoils of electronic music without any boundaries. They are attentive to the reality of the world we all live in and they arise as the representative name of memory and awareness to the imbalance that still exists in this so called modern world, where no one is absolutely saved. Inspired by the underground, The Slum Vagabunds present themselves on an alternative line, far from the mainstream, which is what makes their brand imprint gain strength in musical aspects ranging from deep house to modern techno. Conspiracy is a super fine slice of tech house which will have the floors rocking no doubt. Tight punchy beats deliver the rhythm while a wonderful, deep, pulsating bassline will give the groovers a lot to get down to. Deep, raspy voices come through to add a darker element to the sound. Hypnotic synths lie underneath the main groove as intense pads rise up to dominate making this a real sinister cut that will keep the late night parties rocking for sure. A Final Sentence intros with a rhythmic drum sequence which carries a hint of tribal, giving the track a distinct sound. The groove is powered by a solid punchy kick drum and a deep bubbling bassline that rumbles through the sound effortlessly. Cosmic FX and synths deliver a trippy element putting the tech into tech house with prominence. The drums are the big hitter here though, and no doubt this one will be a floor filler.