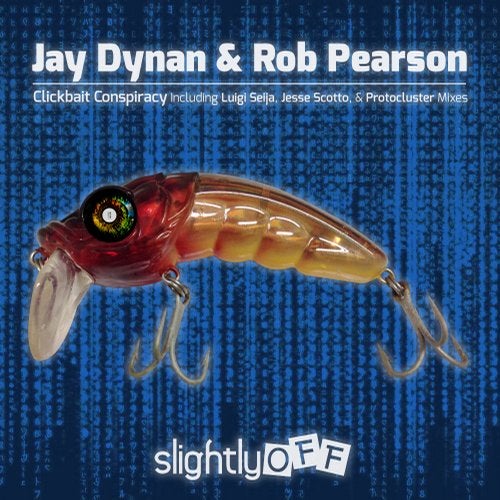 Slightly Off welcomes back Jay Dynan & Rob Pearson with their 2nd release on Slightly OFF 'Clickbait Conspiracy'. Jay & Rob have been extremely busy so far in 2018. Jay's own discography in the last six months has been very impressive. Recent works on Evasive with Lizard Brian & Cosmic Funk have been tearing up the dance floors around the world. Rob Pearson is known as 'above the standard' when comes to the genre known as tech house. Rob's previous works being released on Plastic City, Bosh Recordings, Reverberations, Swag, Amongst Others,and Bombis Records. Rob also has been very active with his own imprints Evasive & DrugSex. To describe the title track, 'Clickbait Conspiracy' has a mesmerizing bassline containing unique futuristic elements that allows your mind to escape reality.
Jay & Rob combine the past with the future to create a perfect blend of 'good' electronic music.

Luigi's interpretation is a mind twister, his version made for the late night audience bringing
you elements that alters your state of mind making you forget that you're on the dance floor. Luigi brings a touch of his unique industrial sound with a rough driving bassline. As his production techniques and experience have grown seeking for forward thinking tracks, this mix is an example of the 'next step forward' to his evolving productions.

Jesse Scotto has been a strong contributor to the Tampa Bay area.
With musical appearances on Slightly OFF, Erase Records, Del Sol Records and Bombis Records to name a few Jesse delivers next level production on every release.
Also, Jesse maintains regular DJ schedule with Serious Soul, Distant Dimension festival, and
Furious Funk parties. It is very rare to see an individual excel as producer and dj. Jesse raises the bar with his mix, adding a driving bassline and some beautiful synth work that sweep you away into a cosmic 'trance'. Jesse precise production work ties together into a dance floor smasher.

Protocluster aka Charlie Mendez brings a modern concept of music without leaving behind his minimal and techno roots. A mix of evolving melodic sequences and soundscapes, combining aggressive synths and groovy beats, the perfect combination to shake the dance floor. Protocluster affection's to music began when he was a younger, playing drums and later guitar and bass. Eventually, the electronic music scene got to him and his obsession with the digital
and analog world got bigger followed by obtaining a degree in music production and audio engineering. Protocluster is known for his residency at Partai Festival since 2015 and for his flexibility playing live; adding a more spontaneous feel to his sets creating and manipulating sounds with no fear, bending the rules to engage crowds to music that has no boundaries. Protocluster's mix contains that groove keeping you locked in to the elements of techno goodness. We at Slightly Off are delighted to have him join Slightly OFF.