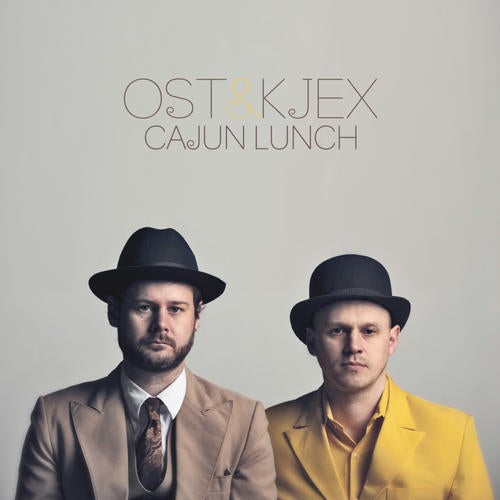 With a sound that straddles electro, funk, disco and house, Oslo based duo Ost & Kjex return with their
second long-player Cajun Lunch on Hamburg based imprint, Diynamic.

The debut album, to their big surprise awarded them a nomination for best electronica album at the
Norwegian Grammys and the pair continued to develop their sound on releases such as More Songs About
Cheese And Revolutionary Tarts, How Not To Be A Biscuit and Boston Food Strangler.
Since then the food boys have awoken, got their hands on some serious sounds and started shredding out
tunes aimed at the dance floor. In the summer of 2008 they stumbled upon Hamburg based Croatian
Solomun, resulting in a collaboration track called "Federgewicht" (Featherweight) and the beginning of their
association with Diynamic whilst only last summer the pair contributed vocals on the dance floor hit
Summertime by UK producer Jamie Jones.

In between live shows and remixing the busy food geeks have now prepared their second course for your
delectation. As the title suggests Cajun Lunch mixes elements of delta blues and bayou basslines into their
organic house sound, especially on the guitar filled Bluecheeseblues Parts 1 and 2 but also in the general
laidback atmosphere that envelopes every track. From the opening sun-kissed grooves of
Mosambiquetravelplan featuring Bugge Wesseltoft on piano to the sexed-up funk of Continental Lover and
the deep house tones of The Yellow Man the boys continue to conspire with the albums guest vocalist,
Tracee Meyn. Cajun Lunch is house music but not as we know it (and certainly with more cheeses). Whilst
The Yellow Man spins a shimmering groove that sees Tracee sparring with Mr. Osts lovelorn delivery we
also find the duos production dexterity in full bloom on the closing Lets Set The Time which takes a slo-mo
house groove into deep dub territory with Mr. Ost providing a dreamlike vocal over the top, lulling us in to a
chilled, hammock-strewn slumber.