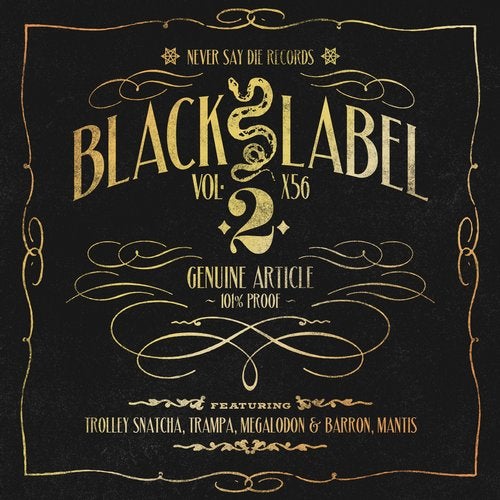 With the dust barely settling from the release of Vol.1, Never Say Die present the next collection in their Black Label series. Another round up of deep and immense sounds, the featured artists this time around are Megalodon & Barron, Mantis, Trampa and Trolley Snatcha. Trolley Snatcha is up first, bringing the menacing yet groovy 'Fuck You Looking At'. It entices with a stripped back dub intro before quickly descending into a jaw-clenchingly fierce outbreak of drops, managing to incorporate elements of carnival into the mix. Trampa, who also featured on Vol.1 with 'Gas Tank', stays true to his trademark monstrous level of production with 'Get Wicked'. A filthy and lingering lead builds up alongside a sinister drum rhythm; the elongated and infiltrating bass backed by sudden vocal interjections of "Get wicked!" along the way. Megalodon and Barron offer 'Drake' next, a real throwback to the heavily percussive and reggae-influenced origins of the genre. The whirling, grinding power drives you along on this one, whilst the two-step riff sequences are given melodic emphasis. The final track comes from Mantis in the form of 'Desolation'. Filled with plenty of syncopated drum patterns, murderous vocals and a chilling use of strings throughout, this skilfully arranged piece takes no prisoners. Never Say Die have once again captured the essence of the term "Dubstep" in this release and Black Label Vol.2 undoubtedly preserves its archetypal sound in true style.