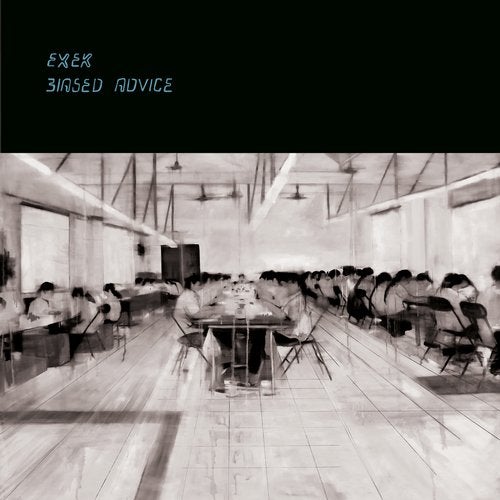 Another Dark Age is proud to release Exek's debut LP, Biased Advice, which follows one self-titled cassette EP (2014) and a single contribution to a split cassette (2015). The album collects rerecorded and past material, which together stands as the fullest realisation of an Exek identity, honed during two years of haunting Melbourne's live gig circuit. Before forming as a four-piece band in 2014, Exek remained an abstract concept in the mind of front man-to-be, Albert Wolski. With songs written but no musicians to perform them he enlisted Andrew Brocchi (synthesiser), Henry Wilson (bass) and Sam Dixon (drums) and together they began recording material according to Wolski 's vision. "Then they were there, on my arms, on my legs, everywhere." - 'Foregin Lesions' The addition of Nell Grant on saxophone made previously murky reference points plainly obvious: Exek are the progeny of a Melbourne scene that established itself around Dave Chesworth and Philip Brophy's Innocent record label of the 1980s and its greatest offering, Essendon Airport's Palimpsest LP (1981). But Exek dared to abandon the pop and funk tropes of the early Australian new wave scene reaching out to German post-punk of the same era. Wolski's songwriting is akin to that of the records put out by Hannover's No Fun Records and Hamburg's Zickzack, channeling the droll lyricism of The 39 Clocks and saturated with self-deprecating Attitude. "New friends, new influence, new ring around the finger, a hedonist who finds regret." - 'A Hedonist' Exek are messengers for today's young, unemployed, immobile, self-obsessed middle-class. The themes of societal isolation, heartbreak, consumerism are all funnelled through metaphors of terminal illness, monsters and bondage. Their vision mirrors Tuxedomoon's 'Holiday for Plywood' but crucially Biased Advice is a sermon that Exek preach to themselves. The band pit themselves as both victims and saviours living in a world that's trying to extinguish them, or worse still, mould them into boring automatons. "Spitting image, two legged, stick figured, adolescent, disinfectant, replicant." - 'Replicate' The conceptual weight carried in Wolski's lyrics follows on from process. Dub and other studio techniques are used throughout Biased Advice and are no better evidenced in the 16-minute modern (and instant) classic, 'Baby Giant Squid.' This song remains unchanged from it's cassette release on Melbourne's Resistance/Restraint label but spread out over one side of a record it lays bare its perfection. Basslines that stand out one moment give way to dubbed out percussion, hissing tape delay and reverb drenched vocals. Simply, this post-kraut-dub-psyche-punk excursion looks back over it's shoulder as it leaves 'Bella Lugosi's Dead' for dead. It's a sublime balance of improvisation and cold calculation. "Excitement entails the probability of murder to eliminate stress." - 'Baby Giant Squid' It's the tension between this teetering psychotic nihilism and arrangement with studio-like precision that gives Biased Advice the tone of a forewarning. But of what? "Listen well." - 'Submitted'