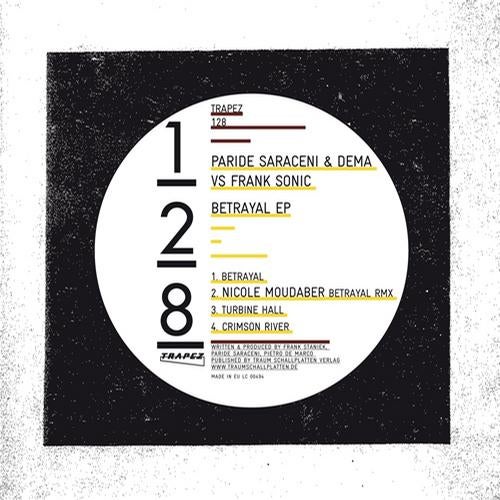 Paride Saraceni and Dema have been creating a steer lately with almost everything they release, so we are looking forward to give them a home at Trapez.They have teamed up here with Butan Resident Frank Sonic. A friend of the Trapez family, who has already released with Trapez successfully this year with his Blizzard EP assembling such fine artists such as Secret Cinema, A. Mochi and Trebor as well as Trapez and dub techno artist Van Bonn.The first track "Betrayal" is a cool techno rocker, steering through traffic with a nice pace, making use of a "stop and go " feeling, down pitched vocals building up a nice beat continuum that is great for djing.Nicole Moudaber recently being at the very top in Beatport with her remixes has transformed "Betrayal" in to a cool slick groover that magically builds up the groove, making nice transitions from one stage to the next one, using a sensual sound design. Her remix is for sure a real crowd pleaser!Track 3 "Turbine Hall" has been played already by Dubfire and is a monster of a pounding, reckless, percussive track. The track incorporates a nice Balearic feeling we weaved in some of Alex Unders music in the past on Trapez."Crimson River" is the most laid back track on this release. A bouncy but mighty house feeling is the core of this track. A nice "walking bass" creates a creepy atmosphere when later chords join the track that can be linked to very cool 90ies vintage techno releases.