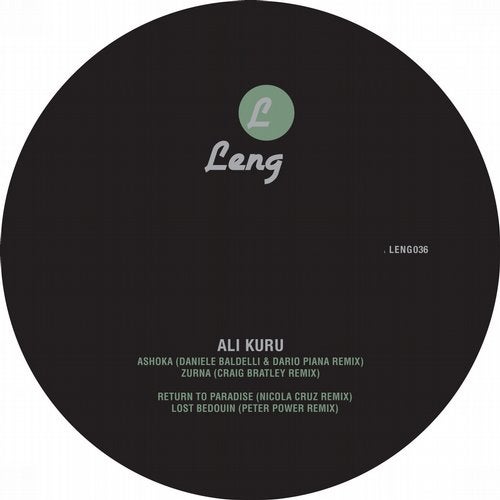 Ahead of the album, we have decided to hand over the parts to a clutch of Kurus tracks to a hand picked team of remixers. Predictably, all have delivered, serving up versions that retain the essence of Kurus atmospheric productions, whilst taking the tracks in a variety of beguiling new directions.

First to feature are cosmic disco pioneer Daniele Baldelli and production partner Dario Piana, fresh from dropping an inspired EP of their own on Leng. Their version of Ashoka successfully wraps feverish Persian instrumentation and vintage synthesizer chords around a rock-solid rhythm track and bold electronic bassline. The result is not so much Afro-cosmic, as Arabic-cosmic.

Next up is long time friend of the label Craig Bratley, whose hypnotic, chugging interpretation of Zurna all crispy snares, dubbed-out electronic motifs, exotic vocals and snaking lead lines recalls the finest moments on his essential Magic Feet label.

On the flip, youll find a pair of revisions from artists who made their name on Multi Culti, a label specializing in the kind of global dancefloor fusions that are near impossible to pigeonhole.

First up is Nicola Cruz, who successfully transforms Return To Paradise via an intoxicating blend of loose cumbia rhythms, dub bass, lilting guitar lines and deep space effects. If Ali Kuru met Adrian Sherwood in Columbia for a jam session, it would probably sound a little like Cruzs fabulous rework.

Peter Power travels further towards the atmospheric depths on his version of Lost Bedouin. More horizontal and clandestine in town, the producer makes great use of Kurus haunting flute lines and evocative field recordings. The resultant remix is gentle in tone and tempo, but also ethereal in its druggy, early morning outlook. Like the other three tracks, its a very fine remix.