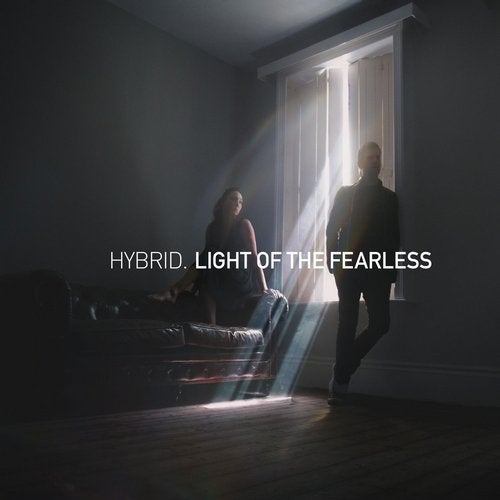 Light of the Fearless, Hybrid's fifth artist album, brings together UK-based, Mike and Charlotte's passion for combining emotionally powered cinematic pieces with astute, intricate and intelligent electronic production. This long-awaited work is firmly based on the foundation of the principles and standards set by previous albums but here there's a clear development and evolution. Never wanting to write the same album twice, Mike and Charlotte have taken another step forward and have created a cinematic, electronic album with songs that stylistically borrow from their childhood soundtracks of soul, funk & hip-hop.

With songs have been inspired by not only events in their own lives but also by movements such as the Heads Together campaign, March for Our Lives 2018 and the Women's March of 2017. The album provides a positive and confident stance on moving forward through adversity and regaining empowerment. This is "The Light Of The Fearless". This inspiration certainly hasn't led to an album encumbered by political statements, but instead gives all the summery buoyancy you'd want to hear at your next festival.

Since their last album in 2010 the band have not only expanded their ever growing body of film score work (Fast and Furious 8, Interlude In Prague, Hercules, Dead in Tombstone, Take Down, Luther, X-men, Deja Vu ) but also saw the departure of band member, Chris Healings in 2015. The cinematic ethos is deep throughout the album with The City of Prague Philharmonic Orchestra performing on eight tracks. Unsurprisingly, the album as a whole works almost as a kind of score, and it's intriguing to be guided through the plot from the outset in the album's first track "We Are Fearless" through to the final track on the album. The expansive and unique cover of Tom Petty's "I Won't Back Down". Hybrid certainly haven't lost their flair for combining cinematic soundscapes, electronics and breakbeats.

Light Of The Fearless is released worldwide on July 27th 2018.

We Are Fearless
The opening track to the album gives an insight into the meaning behind its title and instantly reminds you that you're listening to a Hybrid record. Large analogue synth lines sweep through vicious breakbeats and combine with a wash of stacked vocals and harmonies to guide you through a song inspired by how the youth of America came together to stand up to bring about a change in the light of truly horrific events but also makes the point that the next generation as a whole can be the voice of change. "We are the survivors, we are the next page".

Hold Your Breath
Here is the first glimpse into Hybrid's love of soul and funk and is the first single release from the album. Hybrid combine beats and bass derived from a vat of purest filth with a vocal delivered with the swagger of Stevie Nicks in a song that waves a big goodbye to the person if your life that took you for granted. This is the sound of a band having a lot of fun.

Superpower
The gigantic funk bassline grabs you at the beginning which is then matched by a performance from Birmingham City Gospel Choir then joined by Charlotte's lead vocal defiantly calling out the hooky chorus. Behind the melody is a deeper message. Charlotte's own personal battle with depression & anxiety lead to a track which talks of people with mental health problems as having a superpower. That when times are dark, somehow there's an ability to find a light in the dark, to come back stronger. It's a sentiment that reverberates with anyone who finds themselves in dark places & who needs to see the possibility of finding a way out. Charlotte's mother who passed away in 2012 inspired the lyrics in the second verse, "when it's dark, the stars come out".

Down To The Wire
After working on this album for 4 years (in between film projects) and still adding synth and vocal lines up until the day before mastering, Hybrid may be trying to tell us something with the title of this track. A summery soulful start gives way to a sweeping orchestral section then building to a huge moment of orchestral drum'n'bass. The song reflects on the today's youth movement being able to bring about a change and their feeling of being misunderstood or ignored by those in positions of power.

Usual Rules
This song feels like a pause, a sultry mysterious love affair in a hot country. In the play of the album acting like a film, this is the moment where film score combines with the song and takes on a very tangible form. The song itself speaks of someone choosing to have a short lived encounter regardless of the outcome. This is certainly Hybrid channelling their inner John Barry. Tuxedos and martini anyone?

Light Up
Light up is an immensely positive song about believing and having faith in yourself, realising that you create light in other people's lives and to have confidence in your own voice. "You light up the world with your song". With a brief reference to Trump's wall, the song beckons the listener for a more open minded world not lead by fear or guided by falsehoods. Aside from this inclination, the song is a light in the dark and again shows the light of the fearless. Hybrid's production maintains its ever intimate and intensely detailed traits, deep harmonies and hooks throughout.

Beauty Queen
With an introduction to match "What's The Story Morning Glory", this is the turnaround on the album. Beauty Queen explains the confidence of not having to look like what modern media would depict as beautiful but being able to be just as if not more intoxicating. This is a person who can suck you in, be the poison in your veins, the scars on your skin. Not necessarily what's good for you but what keeps hold of you and then lets you go. Hybrid explore their darker side and mix a fully rock motivated track with sophisticated bass heavy production.

Shaking
Shaking is the equal & opposite to Beauty Queen and seems purposefully placed in the album's order of ceremony. A deeply emotional and passionate song, this is the person who holds the same knowledge of the "Beauty Queen", the knowledge of being able to hurt the one you deeply care about so very easily but in this case, realising, knowing and explaining that it's a power that will never be used. This is essentially a bare bones track and yet each instrument, synth and sound has been delicately crafted and purposefully placed leading to what can only be described as an intensely powerful orchestral ending which echoes the sentiment of the song before it.

Long Time Coming
You get the feeling after 8 years between albums this title is a little witticism from Hybrid. The only instrumental on the album, this underlines Hybrid's adoration of film music whilst still retaining the propulsive elements of their breakbeat past. Delicate, visceral and atmospheric; this is the track that pulls you back into focus in preparation for the final track of the album.

I Won't Back Down - Tom Petty
Perhaps the most unexpected song on the album because for the first time on any Hybrid artist album, it's a cover, and to be more specific, it's a cover of Tom Petty's "I Won't Back Down". Hybrid describe this as a serendipity moment. As a song, the band saw it as something that naturally solidified and completely resolved the ethos, message and meaning of the album. The track "Polaris" had demoed as a pre-cursor to the album but was completely re-scored and subsequently performed by The City Of Prague Philharmonic Orchestra. Through a series of unexpected events, Hybrid's interpretation of "I Won't Back Down" naturally evolved from the glimmer of an idea into an inescapably poignant homage to Tom Petty which now features the orchestral intro to end all intros.

Light Of The Fearless