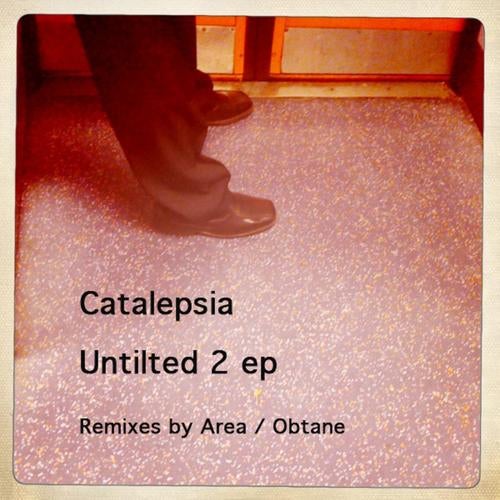 1: Catalepsia: Untilted 2 (Original mix): Head of Metis Recordings, Catalepsia aka Jerome Bazzanella is delivering here an epic tech - house track. After releases on Synewave, Nice and Nasty, Dublin X-Press, Eclectic, hes running his own imprint. With his partner Franz Kirmann hes running Days Of Being Wild, a night and a label based in London 2: Catalepsia:Untilted 2 (Area remix): Currently based out of Berlin, m50 has just recently relocated from Chicago for the autumn season. He has an adventurous, musical approach to mixing that frequently juxtaposes the experimental with the sensual while spinning a rich tapestry of styles and genres. His recording and production work is even more diverse, with originals and edits ranging from work for modern dance and short film to acid house and dub techno reinterpretations. His live and DJ performances have taken him as far abroad as Helsinki, Basel, Tokyo, Toronto, New York, and Los Angeles. Meanwhile, hes managed his own program on WNUR FM in Chicago and has contributed sets to stations such as Netmusique, Destroyer.net, DnBRadio, KFAI, WCKS, KCSB, Livesets, WZBC and WLUW. His charts have been featured at Urb, Juno, Beatport, Resident Advisor and BPM Magazine. This fall, under the Area guise, hes contributed remixes for Davor on the Detroit-based Matrix imprint and Andrew Duke for Montreals Pertin_nce, as well as an original for a music concrete compilation on tonAtom, a German netlabel. Following shortly will be remixes for Brendon Moeller on his new Steadfast imprint, and for Catalepsia on his French label, Metis Recordings, and a debut album early next year. 3: Catalepsia: Untilted 2 (Obtane remix): Obtane/QuitQuiteQuick is a techno artist from the italian west-coast, owner of Zooloft, a techno label devoted to conceptualism and abstract form. When his ears began to capture audio signals, he starts to listen and love disco, funk, soul, fusion and Chicago house, while he was discovering the more experimental and obscure side of electronic music like EBM, minimal wave and IDM. Then the start of djing, in 1994, playing dub-techno like Basic Channel and Chain Reaction, us and swedish techno (first of all Robert Hood, Jeff Mills, Cari Lekebusch, Adam Beyer and Thomas Krome) and dark electro (from Drexciya, Mr. Velcro Fastener, Underground Resistance to the italian pioneers of the Finalfrontier distribution), hunting vinyls in several shops like Mandragora Dischi (little but epic shop based in Brescia, IT) and Optimal Schallplatten (Munich, D). At the end of 2006, after about 10 years of djing, he starts the producer side, as co-founder of Equilibria Records, an electronic dance music label of the west-coast that started to follow the european standards and feelings. He had his official debut as producer on the label itself with the "Cosmic Crossdresser" release, that featured 2 reinterpretations of the canadians Tractile, getting a positive feedback from the german magazine De:Bug and support from the guys of Clink, the swedish Staffan Linzatti and others. In January 2008, he runs his own label Zooloft. With his new label project he got positive feedbacks from people like Marc Ashken, Staffan Linzatti, Arnaud Le Texier. Frankie, Mossa, Matt Tolfrey, Todd Sines, Andre Crom, getting also a support of the first release by Magda and Troy Pierce. In the early 2008 he joins the well-known label Synewave with a debut release supported by Ellen Allien, Len Faki, Sian, Inaqui Marin and Jaumetic. After the summer of the same year, he released his first LP "Stuck on an artificial reality", a collection of 12 weird tracks, from cinematic electronics to loopy techno, inspired by horror b-movies, bdsm comics, odd sculptures and by the strangest things of the Earth.