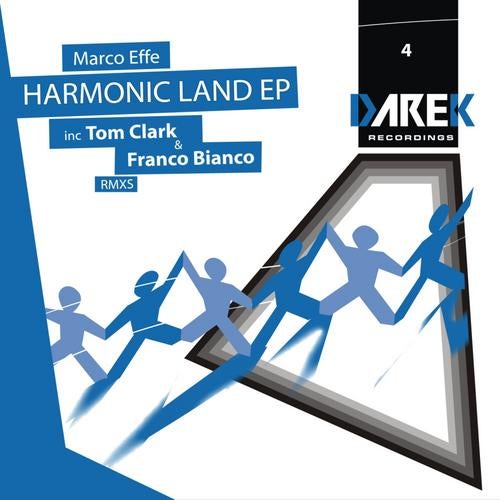 Here we are, introducing the fourth reference of Darek Recordings, a funky collaboration and a jazzy story with a great amount of pumping grooves including fantastic remixes!

This time, we're talking about Marco Effe, a young artist full of talent coming directly from Italy, more precisely from the city of Livorno. He will surprise you with his new appearance and some solid beats.

The original version of Harmonic Land is very pleasant and gets right to the point, preparing you for a journey in the middle of all those pulsating rhythms, constantly growing. You will enjoy this effective track, ready to take you away, custom build to keep the good energy up. Soada holds in common with the rest of this EP a great sense of groove and it has proven its efficacy. Laid back but still achieving a floor filling effect. When it hits, you feel it for sure.

Tom Clark made a more dance floor oriented work of big quality and great sense of punchy grooves, but still versatile. It’s definitely one for the late and sexy night that becomes early morning, he really showed off his quality production skills and we love it.

Franco Bianco delivered us two really cool remixes, different visions of this track, joyous and totally made for crazy and positive party people. Sexy saxophones and flutes combined with a harmonic piano, all of this well shacked and baked to make you move and dance till your feet ask you to stop.

“Vía de expresión” is the way of expression that Franco found to express his discomfort with the Argentinean (and worldwide) society, to those who of a natural way leave themselves be monopolized and brainwashed by the mass media. All over the world in general, the medias are handling the public opinion and they deliberately decide the one who govern, and which govern to make fall down according to the interests of the most powerful.

We have to do something, and do it NOW! Very promptly, if you speak Spanish or understand a bit, you will realize what happens during this mix, specially created to generate conscience, to raise a bit more the voice and to expose what someone is saying. Who knows, maybe it would be the right time that you stop taking drugs, or drink heavily day by day and understand that while you're doing it, there are people who are taking advantage of you.

This track is also a calling to your conscience, a way of saying that you have to think and stick to your positions, by not falling down in the way that the others want you to see things, be original and think right.