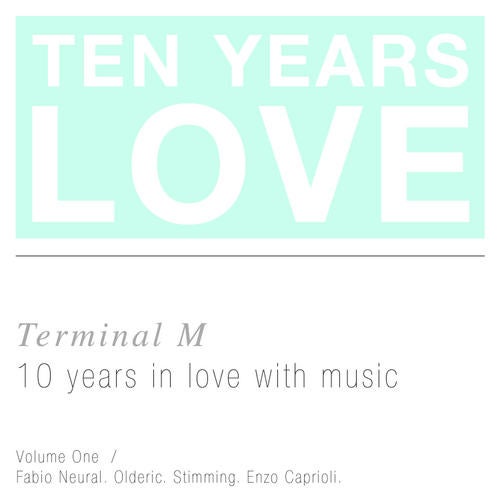 Terminal M celebrates it's 10 year anniversary! Ten years for the love of music!

2010 sees the dawning of a new chapter for Terminal M. To celebrate the anniversary we will release two 12" compilations plus digital bonus tracks from well known Terminal M artists and newcomers. The first EP Compilation, Ten Years of Terminal M: Volume One brings the summer to your living room with a collection of housy dancefloor fillers by Stimming, Fabio Neural, Olderic and Enzo Caprioli.

A1 // Fabio Neural "Brooklyn"
Previously released on VIVA Music, Livorno based Producer Fabio Neural's DJ career began after moving to Spain and experiencing Barcelona's club culture. After studying sound design, he was introduced to the owner of Pure Start agency, who began shipping him around Europe to play records, from Belgium to Ibiza and of course in his home base, Barcelona. In summer 2007 he relocated to Ibiza to immerse himself in the Creme de la Creme of DJ culture. In 2009 Fabio returned to Italy to focus on his productions which are influenced by deep house, electro and Detroit techno. "Brooklyn" is Fabio's debut on Terminal M. It's a deep and grooving house track with an old-school style that evokes that classic New York house vibe. We think you'll agree, Fabio Neural is the new hope of house music Heaven!

B1 // Olderic "Monkey Business"
Olderic is a new name in the upcoming generation of talent to emerge from the Italian underground scene, and versatility is his weapon of choice! Equally comfortable performing his own music live as well as DJing, he currently holds a residency in his native Venice. His sets are a multifaceted mix of modern and old school house, and groovy tech house, all spiced up with his own productions, loops, edits and weird samples collected from all imaginable sources. "Monkey Business", a disco house track that kicks your ass! It's a pumping, high energy track right from the beginning, with lively percussion, dashes of house synth, disco Miami-kissed filtered guitar scratches, and a playful MC with a very important message in the break for everyone in the club. "Monkey Business" has everything you need to bring the people to the dancefloor!

B2 // Stimming "Hideaway"
Closing out the 12" is an artist who needs no further introduction - Stimming's Terminal M debut EP 'Die Liebe' helped put his name on the lips of tastemakers around the world. Now an internationally acclaimed artist thanks to his amazing releases on Diynamic, Stimming's production style is an unmistakable blend of melody, groove and emotion, stylized by the use of lots of self recorded analog elements. Now back on Terminal M with a new track, exclusive to this compilation, "Hideaway" is a techy, sparse, shuffling jam, kept in time by pulsing horns before building up to a spacey and melodic breakdown that tugs ever-so-gently on your heartstrings and then releases back into the groove! A true beauty you do not want to miss.

D1 // Fabio Neural "Let Me Play"
Fabio Neural's second contribution for the compilation "Let Me Play" is a disco house bomb full of lush and hypnotic spacey elements that weave in and out throughout the mix. Ibiza here we come! Available digital only.

D2 // Enzo Caprioli - "Someone"
Newcomer Enzo Caprioli is an emerging producer from the south of Italy who rejects the ready made approach of so many new producers out there today, and believes the best expression to describe his way of making music is: "Absolute Freedom".
Enzo's track "Someone" is a great funky house style track, where chopped and screwed vocal bits take center stage over a simple but highly effective tech house number!