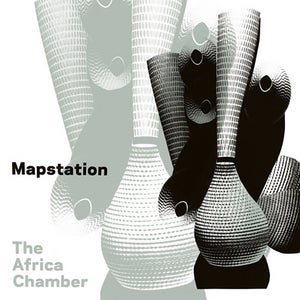 Every day began with a dance that hardly ever stopped.
After three years of production, we welcome the sound of „The Africa Chamber”, the third album by Mapstation. Since 2001, Stefan Schneider has been working under this moniker. Nevertheless, this new release marks a premiere for the Dusseldorf-based artist: it is the first album produced by Schneider himself. Delving deeper into the sounds and subjects already explored on his previous outings “Map Of Africa” (2002) and “Loin D’Afrique” (2006), this record expands on Mapstation’s tentative love and study of the African continent.

Like his earlier aural collages, „The Africa Chamber“ treats this region not only as a geographic location, but more so as a symbol of unknown terrain, of distant shores awaiting our exploration. Indebted to myth rather than reality, this destination becomes an envisioned and visionary realm – which in turn triggers responses in our body. Here, we find ourselves confronted by the unknown and unfamiliar, by things that might take us to uncharted territories. To this end, music serves as an enchanted means for getting seduced and whisked away by the unknown.

Unfettered by the fetish of authenticity, but rather bolstered by various encounters on neutral, diasporic grounds like European Internet cafes („Unitel“), African beauty parlours („The Protector“) or folkloristic kitsch figurines (“Return Of The Hunter”), Schneider prefers an associative approach to music that is firmly – and deliberately – rooted in speculation. His “Africa Chamber” becomes a fanciful wunderkammer of would-be African sounds. In this spirit, the album retraces the subconscious cultural amalgamations that shape our contemporary mainstream culture and reciprocal influences, from the digital replication and recreation of jungle ambience for the Antwerp Zoo (“Nocturama”) to the illustrated Swedish porcelain gracing Mapstation’s cover, heavily influenced by African art.

In a fitting twist, Schneider’s inimitable Mapstation sound – conjuring up broad and expansive soundscapes from a bare minimum of synthesizer arpeggiators – has started to incorporate more and more analogue percussion for a coarser, less predictably textured sound. Amplifiers are miked up. Distortion, overamplification and feedback claim their rightful space. Meaning: sounds are confronted, not neutralised. Besides a plethora of percussive hollowware like vases or pitchers and prepared piano passages – recorded in the studio of Dusseldorf-based pianist and composer Volker Bertelmann aka Hauschka – the album relies mainly on digital synths, reawakened and injected with new warmth.

Continuing his tradition of collaboration, Schneider also invited an eclectic range of master musicians to join him on this sonic journey. Annie Whitehead, on-stage staple of a. o. Robert Wyatt, Afrika Express/Damon Albarn or James Blood Ulmer and a welcome addition to Schneider’s previous album “Distance Told Me Things To Be Said” (˜scape 38), fleshed out two tracks (“Ensemble Of Four”, “Carmel”) with her spellbinding trombone. Nicholas Addo-Nettey, a vital addition to the “The Africa Chamber” since the early days (2006), also played percussion – alongside Tony Allen – for the seminal Fela Kuti Band in the 1970s. He has been living in Berlin since 1979 where he also music with his own band. Drummer Thomas Klein completes Mapstation’s trio of collaborators: When he does not provide driving rhythms to Schneider’s quiet contemplation, he plays drums for Kreidler, the Dusseldorf band that started Stefan Schneider’s own career between 1994 and 1999. In electronic music, Klein has few rivals when it comes to distinct and influential drumming.

Looking far and between, inspiration strikes in the most unlikely places. Once fascination extends its grip, you will encounter it anywhere.