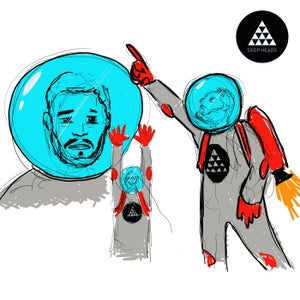 The track takes us on a journey into sounds and dimensions far from this planet.
Warm and expansive pads, wrap the recording with style & finesse, with simple, yet very fitting beats lacing the track together.

Zeb's vocals sit on top of the production and give us an insight into his musical explorations that he details in his lyrics.
A signature Zeb Samuels recording that holds a warm and free floating energy.

The very talented Marc Cyril, who has been involved in many recent Deep Heads productions, most notably the Ash Walker project, features on Bass guitar and adds his signature tones to this beautiful track.

This is the 2nd single to be released, taken from Zeb Samuel's up and coming album 'Arrival', due to drop in the early part of 2021.
Zeb Samuels has seen support from a number of tastemaker publications, including the likes of CLASH Magazine, Magnetic Magazine , XLR8R , Electronic Groove, and Decoded Magazine as well as airplay from BBC Radio 6 Music's Gilles Peterson, Don Letts, Nemone & 5FM's Kid Fonque.
We hope you enjoy.