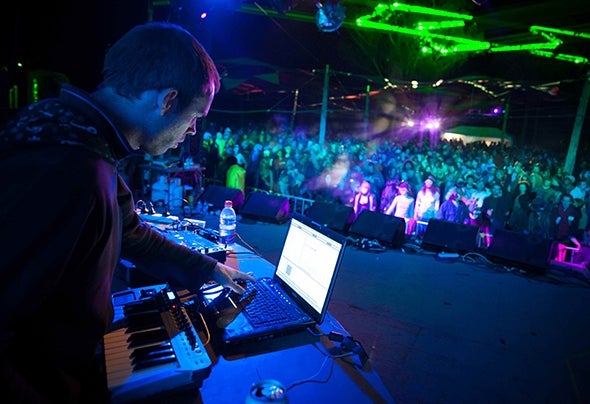 Felix Greenlees, aka Terrafractyl was raised on a diet of classical music, opera and jazz. Trained as a Bassoon player, he started his musical career playing for professional orchestras and opera companies around Australia.During the late 90’s Felix found his way to an outdoor Goa party in Tasmania, was completely captivated by the psychedelic music he heard there and couldn’t resist trying his hand at electronic music production. Since then, he has been weaving the threads of psytrance, jazz and classical music together, incorporating his love/addiction of piano and a new found addiction for building analoge synthesizers. This unique melding of styles quickly led him to become one of Australia’s most prominent electronic music performersFans have enjoyed Felix’s music at all major festivals around Australia, including the 2012 Eclipse Festival where he preceded the solar eclipse and one fan stated that he caused magical unicorns to descend from the sky, farting rainbows. More recently he has also travelled to share his music in Europe, USA, Canada, Russia, Israel and more.While also working on his other projects, Mental Extensions and Hypnagog, Felix has released two full length albums under Terrafractyl; 'Chrysalis' (2009, Sundance Records) and 'Electronic Evolution' (2012, Vertigo records) as well as numerous tracks on various compilations.In 2013 Felix established his own record Label Kinematic Records, to help further his vision for psychedelic music. Promoting and releasing music for many innovative and unique psychedelic musicians from Australia and around the world. So far the Label has released the most recent Terrafractyl offering, an EP entitled 'A Speck of Dust', as well as a Various Artists compilation 'Fluid Mechanics' and several other EP's for members of the Kinematic Family