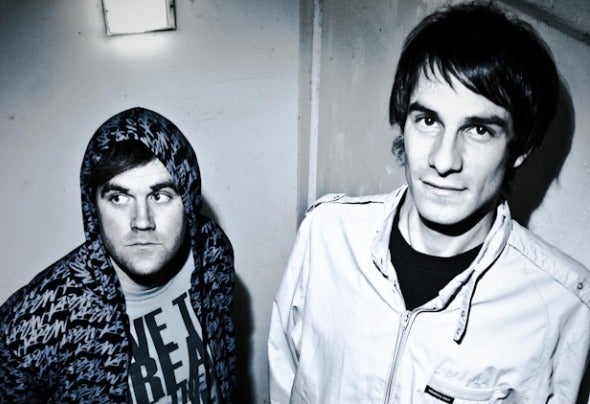 In 2007, while both unknown to each other, and DJing the same night at the famous Hotel Congress in Tucson, Arizona, DJs Swookie Monster and Speedy Graffiti began a small conversation about the state of Electronic Music at the time. What began as that brief conversation sparked by a Photek remix, turned into a friendship spanning these last five years and production relationship that has only grown stronger these past two.Combining talents in 2010, and donning the Production/DJ moniker TABS, the two DJs have been hell bent on creating original production and quality remixes that draw from their similar tastes in EDM while staying true to their evolving melodic sound and bringing that live act to as many places as possible along the way. In just over two years of production, the two have quickly risen to be named “Best DJ Duo 2012” in local arts newspaper The Phoenix New Times (http://bit.ly/S4IqcH). This stands as a huge landmark for the duo in a highly competitive Phoenix and Scottsdale clubs cene.TABS officially released their first two remixes to Hype Machine on September 3rd, 2010 via T he Night T hieves Blog TheGetDownnn.com to a great initial response. Quickly entering the top 100, Ellie Goulding - Starry Eyed (TABS Remix) topped out at 24th spot, while the Miami Horror - Holidays (TABS Remix) topped at the 32nd position. The duo followed up this success with a Bootleg of Foster The People - Pumped Up Kicks which was featured on Liquid Todd’s XM Radio Show “Boombox Radio” and an appearance on DJ Lindsay Luv’s Official New Year’s Mix Tape for lingerie giant Victoria’s Secret (http://bit.ly/Qx9ugE).On the performance side, 2011 led TABS to opening for some of the biggest names in Electronic music with opening sets in both Arizona and California for Brazil’s The Twelves, Veteran Producer Gigamesh, Los Angeles Rising Star MYNDSET, Chicago’s Party Rockers Midnight Conspiracy and Bass Music Standout Vibesquad. 2012 saw an early Top 5 Hype Machine charting for their re-pitched vocal release of the dance floor classic: Kaskade & Deadmau5 – Move For Me (TABS Remix). The Duo has also been very hard at work in 2012 completing bootleg remixes of Porter Robinson, Sander Van Doorn, Goldroom, Swedish House Mafia, The Gossip. 2013 has already seen a remix for the new Classixx single, the second volume of their mixtape series "Killing It", as well as an official remix off of rising EDM talent Prower's first dual EP "EFF and ZEE", all of which can be found on their Soundcloud account at http://www.soundcloud.com/TABSdjs.Swookie Monster is part of The Night Thieves Collective in Phoenix,Arizona in which local publication The Phoenix New Times quoted "...The Night Thieves collective is slowly taking over the Valley's electronic music landscape". Swookie Monster is responsible for starting two of Phoenix’s most notable Dance nights of the past two years. One Gin & Tronic, which he played host to in Tempe, and the other, was Phoenix's fastest growing Saturday night dance party White Rabbit at The Historic Hotel San Carlos in Downtown Phoenix. He spent 2011 opening solo for artists lightsoverla (At Dawn We Rage), T he UK’s Savage Skulls and Moombahton innovator Dave Nada as well as Midnight Conspiracy on their first tour through Phoenix.