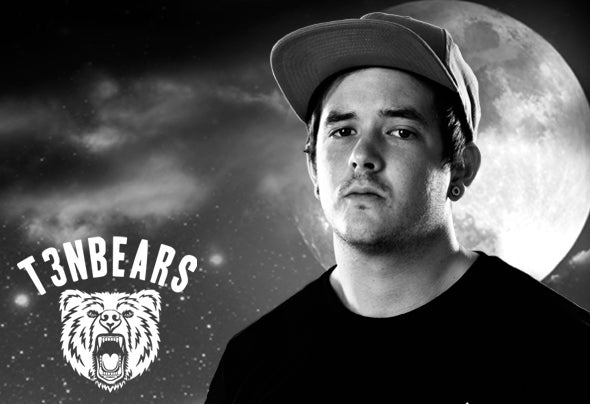 Tom Leithead-Docherty (born April 13th, 1989, Helsinki) known by his artist name T3nbears, is a British electronic producer, musician and singer songwriter.The name T3nbears comes from a British expression used for excess like “I’m hungry as ten bears”, “going hard like ten bears” and it also relates to an old Indian Chief ‘Ten Bears’ who was known for his attempt to negotiate peace between the United States and the Comanche in the 19th century.Growing up in the UK Tom joined the band POKERFACE/D as the guitarist in 2006, and recorded 2 EP’s and 3 singles with the band before leaving to pursue a new project with the bass player in 2008. He began his first string of shows with his new band (Cubrik) and joined shows to support bands such as Blakfish, Tubelord, Colour and Mutiny On The Bounty.When he was 19 the desire for a career of his own started growing. He was always waiting on his band members and sound engineers to finish the music, so he decided to learn producing himself. He left university for a job as a tea boy in the London recording studio Metropolis, where he worked his way up and managed to assist on recording sessions with Will.I.Am, The Horrors, James Morrison and Example. With this experience, Tom left for a job as sound engineer and producer at a songwriting house south of London. It was here that Tom co- produced the track ‘Ain’t A Party’ of David Guetta and GLOWINTHEDARK in July 2013.After working with GLOWINT HEDARK, they decided to team up. Ever since Tom is officially part of their production team. He has co-produced the tracks ‘NRG’, ‘What You Do’ and ‘Charged’ of GLOWINT HEDARK. Right now he is working hard on his own tracks, in which you can also hear his live experience as a musician.His dream is to be a respected and successful musician and to create music that people will always remember.