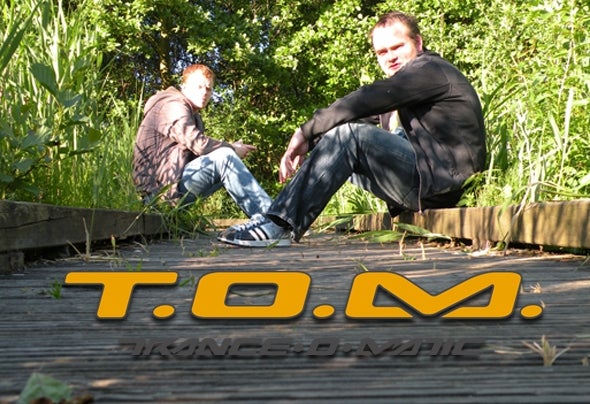 T.O.M. Stands for Trance-O-Matic, which coincidently also stands for TheO Mulder. T.O.M. consist of two members, Janco Krale (28) & Theo Mulder (28). The duo comes from a little town called Staphorst in the north of Holland near Zwolle. They have always been good friends and had this love for Music since they can remember.In 2005 they seriously started with DJ-ing and producing their own tracks.Specializing in trance and progressive. Despite of their love for vinyl, they had to give up the fight because it being outmoded and at the end of 2009 they started using cd players.Since then T.O.M. has been DJ-ing in and around Holland aswell as in Germany, Czech Republic and Slovakia with highlights such as: New Year's Eve Prague (CZ), Free Summer Festival, Kosice (SK), Sound Of The Netherlands (CZ), Language Of Trance (CZ), Feel Trance On Tour (CZ), Feel Trance (DE), Fusion Of Dance Festival Winter & Summer Editions (NL), Queen Dance Festival (NL) & Dance 4 Freedom (NL).T.O.M. has played together with some big names in the industry like Marcel Woods, Ron van den Beuken, Sequenta, Dazzle, Daniel Wanrooy, Amex just to name afew.T.O.M.'s fresh sounds and rhythms quickly made them a favourite within the crowd. In 2009 T.O.M. chose to invest more time in producing. Nowadays Theo is the dj / producer and the face of T.O.M. while Janco is co- producing, doing the management and keeping the website, contacts and social networks up to date.For T.O.M. it has been an uphill battle to get into the trance scene. Living in Holland being a producing duo they have to bring something new to the market, because there is a lot of great dj's and the bar is set very high. Since 2009 they had releases on Black Hole Recordings, In Trance We Trust, Fektive, Musical Madness, Spinnin and made remixes for the likes of: Ron van den Beuken, P.H.A.T.T., Virtual Vault, Julian Vincent, Amex and others.Others also have taken notice of their production skills, including ATB who have licensed their track Monsoon (Jason van Wyk Remix) for his cd "The DJ6 In The Mix" and Bobina also chosen Monsoon (Original) on the new "In Trance We Trust" compilation. Nowadays the productions from T.O.M. got support from Tiesto, Above & Beyond, Ferry Corsten, Paul van Dyk, W&W, Markus Schulz, Alex Morph & Paul Oakenfold and many many moreOn a monthly basis T.O.M. is featured on their own radio show called: Colours by T.O.M. on Puresound.FM.To top it all T.O.M. had one of their big spotlight moments in Tiesto's show called: 15 Minutes of Fame @ Tiesto's Clublife on Radio 538.